A flat pack, open source, robot arm, that you can build with nothing but a screwdriver and enthusiasm.

A flat pack, open source, robot arm, that you can build with nothing but a screwdriver and enthusiasm. 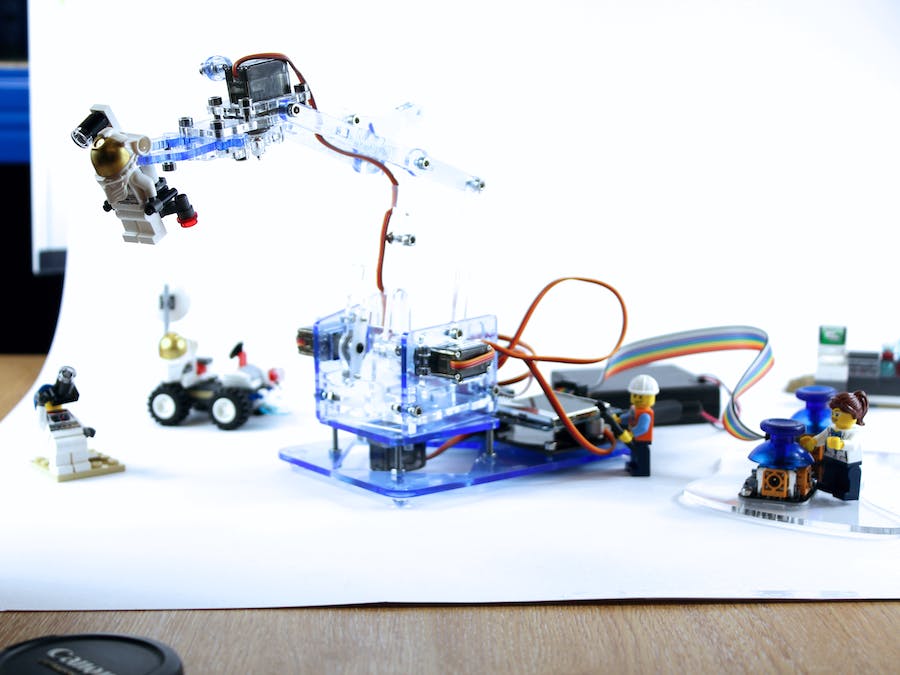 This is the very latest version of the build instructions for the MeArm Robot Arm. The MeArm first came to instructables in April 2014 when we claimed a second prize in the Robots Contest. Since then we've seen around 10,000 built all over the world! Just a handful are shown on our map, but we're really proud that with the help of instructables we've become the world's first viral robot!

We've put together these instructions to complement those on our resources page.

Step 1: Grab your files, fire up your lazors!

The MeArm is still and has pretty much always been open source hardware. So you can grab our files over at thingiverse. It's a .dxf file so it should work on most laser cutters and we've put a box around the parts so you can set it to the correct size. We use 3mm acrylic, but the design is fairly tolerant and we've seen it made in wood and even 3D printed.

You'll need a bunch of screws too. The current load out requires:

All M3 size, that's Metric 3mm. Which I understand can be tough to find in the states, but come on you made it to the moon, you can work out an appropriate alternative!

If you've laser cut your parts or purchased one of our kits you'll really want to get it built. But first you need to complete a vital step. We need to calibrate the servos. Here we'll use our Brains Board, which is an Arduino compatible, but you can use anything that will generate a PWM signal to calibrate them. There's MeArm code available for Arduino, Raspberry Pi, Beaglebone Black, Sparkcore and Espruino.

Using our Brains Board it will come programmed to go to the default positions. Which are 90, 90, 90 and 25 for the servos for the centre, left, right, and claw respectively. Mark a centre line onto the spindle and body of the servo and you can also mark them c, l, r, and c or by another system that will mean something to you.

Don't be tempted to turn them by hand, the torque provided by your mighty strength could strip the servo gears. For the same reason it's really important that you do this process before building your MeArm.

If you're using and Arduino then the setup shown in the image above and this code will give you the same result. We use Codebender for our demo code and would love a tshirt. So please use this link if you're going to open an account.

The most important part to realize in setting up your servos is that you're not able to power them via your microcontroller. You need a separate 5-6V 2A power supply, with a common ground to the micro controller. Check out the Arduino set up image for more info.

With your servos calibrated we can get cracking. Literally if you have one of our snap out packs!

You'll probably have to spend some time taking off the protective backing on the acrylic pieces. You can either do that as you go or all at once. Your call.

Locate the largest part (#1) and attach the sticky pad feet to its corners. Then insert the four 20mm screws from the underside and screw four nuts half way down them. Now find part #2, #3, your centre servo, and two 8mm screws. Thread the servo through part #3, which we call a collar. Push the screws through the collar and then screw them into part #2.

The screws self tap into part #2, this means they cut their own thread. On the MeArm there are two hole sizes one at around 3mm where you can push the screw through and the other at around 2.6mm where we want the screw to self tap. This is a method we borrowed from the amazing PlotClock by Joo.

Now we attach the servo / collar assembly to part #1 via the 20mm screws, these will self tap and the orientation of the holes on the parts should mean you can't get it the wrong way around. This is called Poka-yoke and is a method for fool proofing designs. If you have an early model v1.0 you'll see my attempt at this is over zealous as there is only 1/8 ways of getting it right (if you can't match up the holes flip the part over). Later version were tempered by the advice of Scott Pierce and have 1/2 ways.

Thread the servo through the collar (part #5) and then the servo cable through the cable tidy hole. Screw the collar to part #4 using the 8mm screws being careful not to over tighten. You don't want the acrylic to bend, just hold the servo in place.

Now attach the servo fixing (the white thing, they're called horns) to the servo arm (#6) using the sharp screws from the servo fixing pack. These will self tap into the white plastic servo horn. They can be a bit tricky so please be careful here. If you're building with a child then this is on time you'll want to get involved.

Attach the servo fixing to your calibrated servo as shown, it should be parallel with the longest side of part #4 and the lines you drew on earlier should still match up. Using the small machine screw from the servo pack secure it to the servo but again do not overtighten!

The parts we want here are:

Thread the servo through the collar and the cable through the cable tidy as before attach to the side plate with the 8mm screws, again being careful not to break the plate by over tightening. Attach the white servo horn to the servo arm (#13) using the sharp screws as before. Attach this to the servo with the arm at 90 degrees to the longest side of the side plate. Again the black lines you made should line up.

Finally in this stage attach part #17 to the side plate using the 6mm screw.

These parts join the left and right sections together. We call them the base and the pig.

For the base find part #14 and a servo fixings pack. Carefully noting the orientation attach the servo horn using the sharp screws. At this stage offer it up to the left side piece to see if you've got things the right way around. The Poka-yoking should show you the way here.

For the pig find parts #8, #9, #10 and a 10mm screw. Screw them together in the order shown, which should be #9, #10, #8 with the screw coming in from the #8 side and self tapping into #9. Sorry the ordering of that is confusing but this is honestly the first time I've written that down with the numbers! It's important that these move around the axis (the screw) in a straight path and that they move freely. If they don't move in a straight path then unscrew, hold them together and screw in again so that they are all as parallel as they can be.

Now we want to start bringing the left and right parts together using the middle parts.

With the pig in place you can attach a lever (#17), an optional spacer (#20) to the servo lever (#6) and the lever on the pig (#9) together with a 12mm or 10mm screw depending on whether you need the spacer. The Doman Servos seen here don't require a spacer but the latest servos we use do. There are spares in our pack for this purpose.

Now attach the rear strut, part #11 using a 12mm screw and nut as on the front strut. It should slot over the rear of the pig and also the knobble on the base plate. Tighten this but leave a little slack as the adjustment will come in handy when you're mating the right hand part.

Now we mate the right side to our complex assembly, this also involves putting on the webbing part #15.

Now comes attaching the right side to the rest of the assembly. You can put the 12mm screws and nuts through the right hand side before you try mating the parts up, or you can leave them off and put them on afterwards. Here you're trying to get a number of parts in slots at the same time and it can be tricky

Take your time and be patient please. This step is the most tricky in the whole build. Once you've done this it gets easier I promise!

Now we have the lovely centre assembly complete we can screw it to the base.

This is a matter of mating the servo horn to the centre servo and securing with a screw.

Now we can add part #16 with the use of two 6mm screws. This will screw onto part #10 and onto #17. You should be able to move the servo easily with this new part!

Next we build the right forearm.

The first thing to do is hook part #18 onto the left forearm part that you've just attached and then onto the right forearm which we'll call part #31 as it seems it's not numbered!

Attach the triangular part #19 to part #31 and onto part #13 (the bit that's attached to the servo) with a 10mm screw. Don't over tighten as we need all these parts to move freely.

Then attach the final part #17 to the inside front of part #19 with a 6mm screw.

Thread the servo through the remaining collar, #21. Insert parts #22 and #23 into the side slots made by the servo and part #21 then using part #24 secure them with four 8mm nuts. Again be careful, we're nearly there, you don't want to break anything.

The next parts will be a little unsecured until the last screw is in place so don't worry if you drop something now. Secure part #28 through the left hand hole on the head assembly with an 8mm screw into part #25. Then mesh the gears on part #27 and place a 12mm screw through it, the head assembly and part #25. This won't be secure yet but keeps it together.

Attach a servo horn to part #30 and secure it to the servo using the machine screw. Attach #29 onto #30 using two 6mm screws.

Last part is to attach the head.

This is secured by two 8mm screws through the forearms into parts #22 and #23 on the head. It might make it easier to slacken the 8mm screws on the head servo clam.

Now switch on and play!

This section will be filled in over time with common issues. If you have one let us know and we can add it.

Left servo arm appears stuck. Typically this is down to a stiff joint. The head assembly attachment is the one people forget.

1 project • 7 followers
Jack of Robotics, Electronics and Everything. Master of Chemistry. Proponent of Open Source. Has a beard.
ContactContact