Learn how to use Electric Paint with LEDs.

How to Use Electric Paint with LEDs

How to Use Electric Paint with LEDs

Learn how to use Electric Paint with LEDs. 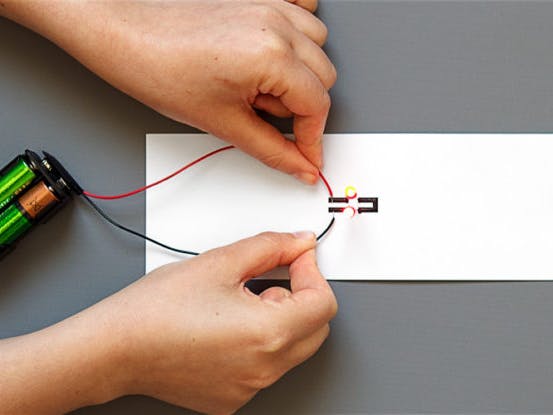 Electric Paint is a great and fun way to connect batteries and LEDs together on paper. But there are some things that you need to know when using Electric Paint in circuits. In this tutorial, we’re going to give you an overview on how to use Electric Paint with LEDs. We aren’t going to dive too deep into the science of electric circuits and LEDs, but if you would like to learn more about that, we’d recommend this excellent article. Some things to keep in mind:

In order to light up an LED, it needs to be connected to a power source, for example, a battery or the digital pin from the Touch Board. When you connect the LED to a power source with a wire, you need to connect a resistor in series with the LED. This to limit the current that runs through the LED.

When you apply the paint with the tube, you can work from two angles: either 90º or 45º. If you hold the tube at a 90º angle while applying, then you will get a nice thin layer of Electric Paint. If you apply the paint at an angle of 45º, you get a thicker line of paint. Thicker lines of paint are generally less resistive than the thin layer, but it takes longer to dry. To get the least resistance with Electric Paint, we’d recommend screen printing or stencilling.

The amount of resistance in the circuit matters, because the larger the resistance, the less current there is for the LED. So if you draw very long lines and attach an LED at the end of the lines, then the LED might not get enough current to won’t light up.

On the right are two examples, one where there are short Electric Paint tracks and one with tracks that are three times as long. As you can see on the example with the longer tracks, the LED isn’t as bright.

Step 4: In parallel and in series

You can still connect multiple LEDs with Electric Paint, but remember that when they are connected in series or in parallel, the LEDs might not have current to light up.

As you can see in the example, the second LED in the parallel circuit doesn’t have enough current.

That is all you need to know regarding Electric Paint and LEDs! We would love to see your creations, so feel free to send some images or videos either to info@bareconductive.com or via Instagram or Twitter.