How To Add Dissolved Oxygen To The WiFi Hydroponics Meter

How To Add Dissolved Oxygen To The WiFi Hydroponics Meter 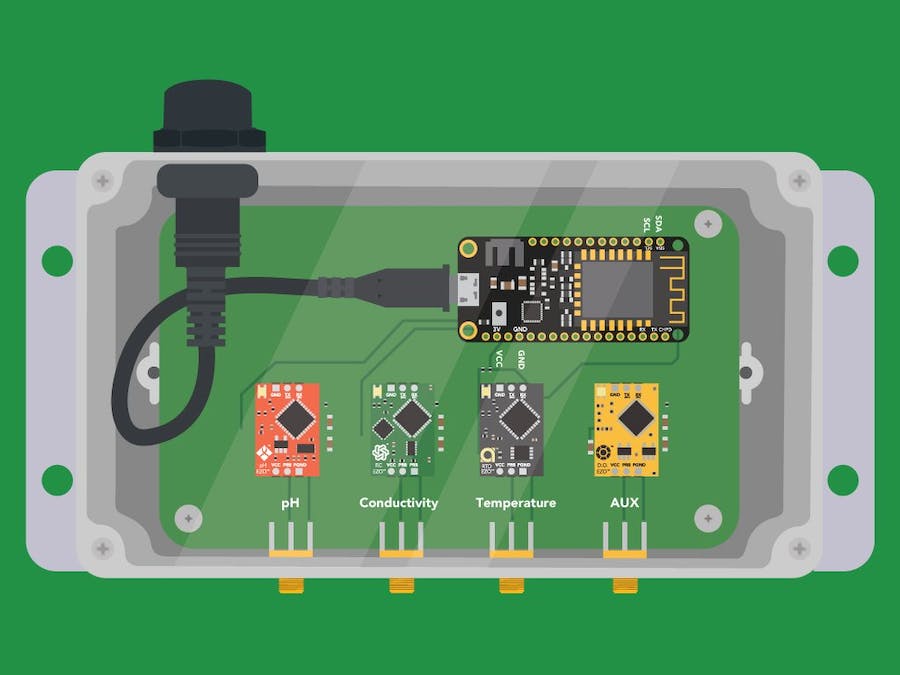 This tutorial will demonstrate how to add the EZO D.O circuit and probe to the WiFi Hydroponics Kit from Atlas Scientific.

Go to your channel in ThingSpeak.

Fill in the box for field 4. For reference, we entered DO (mg/L)

Scroll to the bottom of the page and click Save Channel

The simplest way to set the D.O circuit to I2C more is with the I2C Toggler.

1. Set the switch on the toggler towards DO

4. Press and hold the button for about 1 second

After you have put the circuit in I2C mode, insert it into the AUX port of the hydroponics meter and connect the probe to the corresponding SMA connector.

Step 4: Flash the meter with code

Open the file within the Arduino IDE and set your IDE to the correct target CPU: Tools > Board > Adafruit Feather HUZZAH ESP8266

Set the correct port where the CPU is connected. For example, it is connected to COM107: Tools > Port > COM107

Before you flash the CPU with the code, you need to add your wi-fi name and password with the Channel ID and Write API Key to the code.

Flash the CPU with the code. You are now ready to take readings.

Atlas Scientific created a list of calibration commands that are built into the library. Type in help in the serial monitor to see the list of commands.

Send the command poll. This will let you see the readings once per second, and it will stop uploading to ThingSpeak while you calibrate.

Onto calibrating the dissolved oxygen probe. The EZO D.O circuit has a flexible protocol, allowing for a single point or dual point calibration.

Let the dissolved oxygen probe sit, exposed to air until the readings stabilize (small movement from one reading to the next is normal).

Once the readings have stabilized, issue the command do:cal

Only perform this calibration if you require readings below 1.0mg/L.

After you have finished the single point calibration, place the probe into the zero dissolved oxygen solution and stir the probe around to remove trapped air. Let the probe sit in the solution until the readings stabilize (small movement from one reading to the next is normal).

Once the readings have stabilized, issue the command do:cal, 0

To resume taking a reading every 15 seconds and uploading it to ThingSpeak issue the datalog command.