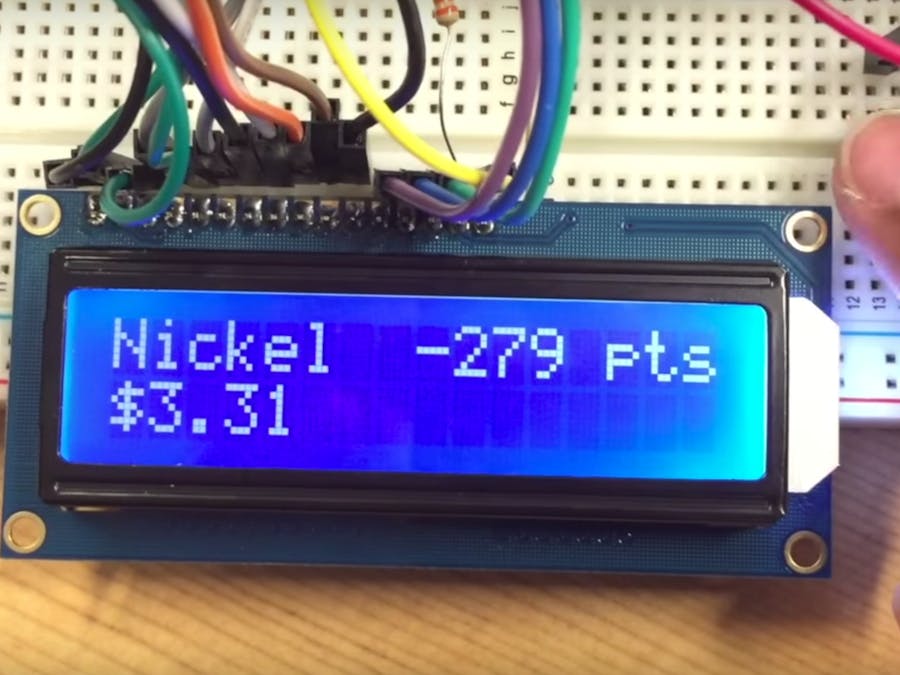 This demo utilizes the LCD display and four momentary button switches to simulate the different coins sensed by the LDC1000 (an inductance to digital converter). Each button represents a different coin (first button is a penny, second is a nickel, third is a dime, fourth is a quarter). After each button is pressed, the LCD display will show which coin was “inserted” and will calculate the total monetary value of the coins counted.

Furthermore, at the Texas Instruments’ United Way Penny Wars fundraiser there is a point system that allows teams to compete against one another in donations. Each team has a jug, and every penny counts as +1 points, but a nickel counts as -5 points, a dime counts as -10 points, and a quarter counts as -25 points. Therefore, teams put pennies into their own jugs to increase their score and put the other coins into the other teams’ jugs to decrease their score. At the end of the donation period, the team with the highest score wins the competition. This competitive nature all of us have is what drove us to also adding the point system to our demo as well. The competition will raise momentum, causing people to donate more.

Here is a video of the demo working!

There were many issues with this demo at first, however, after everything was sorted out, it was not that hard of a demo to complete.

This demo is a portion of a bigger IoT coin counter project. If you would like to see the status and updates on the project, please visit THIS BLOG.

One of the issues that could be faced while replicating this demo is the LCD showing random characters after clicking the buttons. An example of this occurring is shown below:

In order to fix this problem, you must switch from the 4-bit mode to the 8-bit mode. This is by utilizing all 8 data pins on the LCD instead of only the last 4. The reason this occurs may be because the program may not be as simple as it seems causing the LCD display to have problems in the 4-bit mode.