Field alternating 3D FPV camera for Android which is small enough for a micro quadcopter.

Field alternating 3D FPV camera for Android which is small enough for a micro quadcopter. 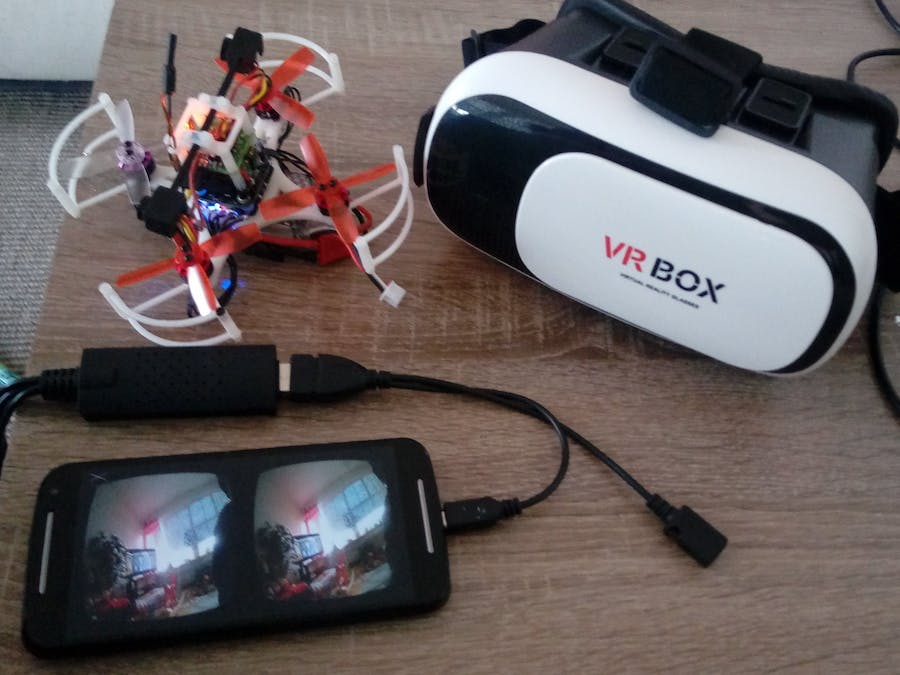 FPV is a pretty cool thing. And it would be even better in 3D. The third dimension does not make very much sense at big distances, but for an indoor micro quadcopter it's perfect.

So I had a look at the market. But the cameras I found were all too heavy for a micro quadcopter and you need expensive goggles for it. The other possibility would be to use two cameras and two transmitters. But again you have the problem of the expensive goggles.

So I decided to make my own. All cameras on the market use a FPGA for making the 3D picture. But I wanted to keep it cheap and easy. I was not sure if it will work but I tried to use two Sync Separator ICs, a Micro controller to manage the syncing and a analog switch IC to switch between the cameras. The biggest problem is to get the cameras synchronized but it is possible to do that with the controller. The result is pretty good.

Another problem were the 3D goggles. Normally you need special 3D goggles which are pretty expensive. I tried a few things, but I was not able to solve it just with electronics. So I decided to use a USB video grabber and a Raspberry Pi with google cardboard. This worked pretty well. But it was not very nice to put the screen into the cardboard and have all the electronics around. So I started to write an android app. In the end I had a complete 3D FPV system for android for less than 70 Euros.

There is a delay of about 100ms. That's because of the video grabber. It's small enough to fly with it.

You need pretty good soldering skills to make the camera because there is a self made circuit board but if you are a little experienced you should be able to do it.

Order the PCB. You can order it directly from Aisler with all the parts you need. After you have received the PCBs assemble all parts. It's pretty small, but with magnifying glasses it's easily possible. (I use desoldering wire to remove the soldering bridges from the ICs. I'm sure you find some soldering howto in the internet)

If you want to make the PCB yourself or order it somewhere else, you can download the eagle brd file and the parts list (3dcam_mini_tiny24.txt).

When you are finished with soldering and you have checked all connections again you can connect the isp wires. In the first picture you see where to connect SCL, MOSI, MISO, RESET, + and -. In the third picture you can see the pinout of the AVR ISP programming wire. The fourth picture shows how my connections looks.

Download and extract the '3dcam.zip' file from the link on the bottom of this step. The hex file is located in the Debug folder. The fuses should be programmed to LFUSE 0xe2, HFUSE 0xDF and EFUSE 0xff. If you use linux and avrdude you can use the flash.sh file in the Debug folder. The avrdude command line is: "avrdude -c avrisp2 -p t44 -U flash:w:./3dcam.hex -U lfuse:w:0xe2:m -U hfuse:w:0xdf:m -U efuse:w:0xff:m". If you use windows you will find a howto with google.If programming worked and you soldered alright, the LED blinks fast. This indicates that no camera was found. You can now remove the programming wires.

The source code is included. Feel free to upgrade the code.

Here is the LINK TO THE AVR PROGRAM

Now its time to connect the video transmitter. I connected it with some strong wires to have it mechanically fixed. Connect + to +, - to - and the 3D video output to the video input of the VTX. You can see it in the second picture. If you use a 5V video transmitter like me, you can connect the internal 5 V pin to + with a soldering bridge.You can see in the third picture where the connection should be.

Print the three stl files. I printed it with PLA, a 0.3 mm nozzle and 100% infill. Feel free to design your own cam holders if you don't like mine or you use different cameras.

Step 5: Connect the Cameras, Download the App and Test the 3D Camera

Now you can test the 3D camera. Connect the two cameras to the PCB like in the picture. You can solder the cameras directly to the PCB. I just use plugs because I tested a few different cameras.

Download the App 3D FPV Viewer Lite from google play store. Start the app and connect the UTV007 video grabber with a USB OTG cable. (The app also supports UVC video grabbers with a resultion of 640x480, but it is only tested with the UTV007 video grabber. I tried a Eachine ROTG01 receiver, but it didn't work because it deinterlaces the video). Tap on START and power the 3D camera. The LED on the PCB blinks a few times. Then it flashes constantly for NTSC cameras or is off for PAL cameras. If it is blinking fast, the circuit could not detect the cameras. After a few seconds you should see the pictures of the cameras on the android screen. Maybe you see a part of the first camera at the picture of the second camera like in the third picture. That's OK for the moment. I will give some tips how to solve that at the end of the tutorial. If you get no picture, just one picture on both sides, a very small picture on one side or a picture that is not aligned alright, try to restart the camera a few times until it's OK. You can close the video window on the upper left side where the 'X' is. Even if it's working you should go on with the next step.

Step 6: Connect the Clocks of the Cams for Syncing(not Needed But Strongly Recommend)

To get the cameras synced good they have to run from the same clock. You don't need to do that but it is strongly recommend. If you don't sync them you will get bad color distortions or it doesn't get synced at all. It depends on the cameras you use. Sometimes the clocks of the cameras are far away from each other.

If you use big cameras this is pretty easy. With the small cams I use it's pretty hard but possible. Sadly I have no good camera to make good photos, but I added some pictures to make clear what to remove and where to put the connection cable. I used a small side cutter to remove the crystal. After you have added the connection cable you should fix it with some super glue.

If you have an oscilloscope power both cams and check the output signal to be sure it's working.

Conclusion: The camera is working pretty well. Even if it's not perfect, It's usable. There is a delay of about 100ms, but for normal flying and to test 3D fpv it's ok.

Details about the code:

The code is just documented in the 3dcam.h file. All important settings can be done there.Some comments on the defines:

MIN_COUNT: After this number of lines the side is switched to the second camera. You should leave it how it is.MAX_COUNT_PAL: This option is just used in PAL mode. After this number of lines the picture is switched back to the first camera. You can play around with this parameter if you use PAL mode.MAX_COUNT_NTSC: The same for NTSCDIFF_LONG/DIFF_SHORT: These parameters are used in auto detect mode. This number is subtracted from the auto detected switch time. You can play around with these parameters.MAX_OUTOFSYNC: This was meant to check the syncing of the cameras, but it never worked alright. Just leave it like it is or try to implement it yourself.

If you use my PCB you should leave the rest of the defines like they are. A makefile is located in the Debug folder.

That's it. I will add an inflight video and an tutorial for the quadcopter soon. For the moment there's just the camera test video.