Bring fun to a party with this portable lights device.

Bring fun to a party with this portable lights device. 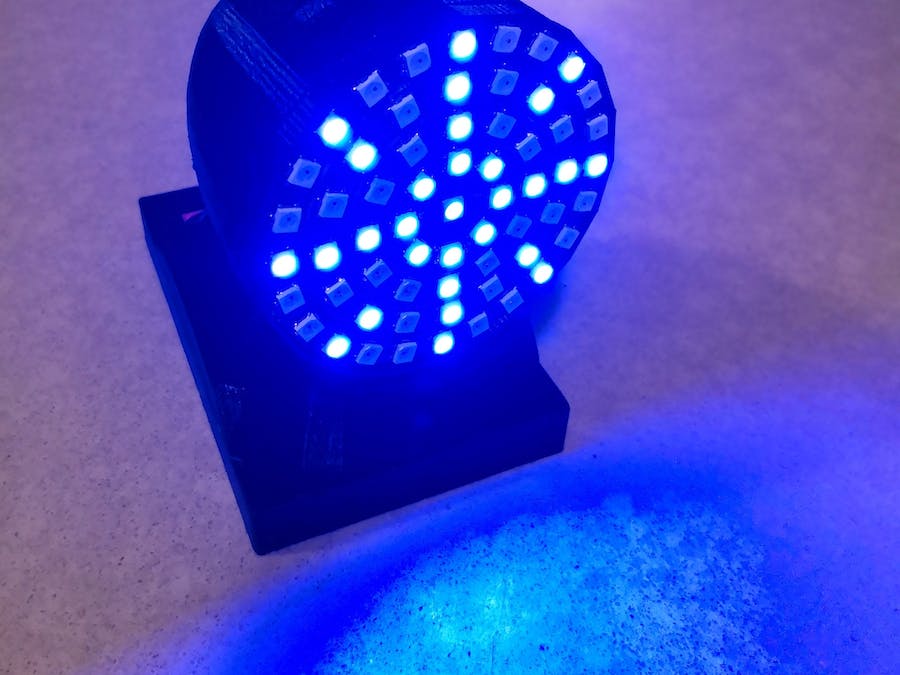 Can you bring light to a party and make it more fun?

That was the question. And the answer is YES (of course).

This tutorial is about making a portable device that listens to music and creates music visualization out of concentric rings of NeoPixel LEDs.

An attempt was made to make the device "dance", i.e., move to the beat of the music, but beat detection proved to be a more complicated task than it sounds (no pun intended), so "dancing" is a bit awkward, but still is there.

The device is Bluetooth-enabled and will respond to text commands. I did not have the time to write an App to control Party Lights (either Android or iOS). If you are up to the task - please let me know!!!

If you like this tutorial, please vote for it in the Make It Glow contest!

To build Party Lights you will need:

The idea is to have a portable device that could be placed close to a music source, and that would create colorful music visualizations. You should be able to control the device behavior via buttons (touch) and Bluetooth.

Currently, Party Lights have 7 visualizations implemented (let me know if you have more ideas!):

Visualizations that rotate their color palette could also be "frozen" if a user likes a particular color combination.

And as a couple of more controls, the user can change the microphone sensitivity and enable/disable servo motor "dance" mode.

A fritzing schematic file is included in the package on Github in the "files" subfolder.

The microcontroller also attempts to perform "beat" detection on the 63Hz "bass" band. I am still working on a reliable way to detect and maintain beat alignment.

The use of "touch" buttons was an experiment. I think they work pretty well, however, lack of press feedback is confusing somewhat.

The core of visualization is a 61 LED wheel.

Please note that the part comes as individual rings which you will have to put together. I used rather think copper wires for power lines (which also hold the rings together nicely), and thin signal wires.

The LEDs are numbered 0 to 60 starting from the bottom outer LED and going clockwise inward. The center LED is number 60.

Each visualization relies on two-dimensional data arrays, which map each LED into a specific position for the target visualization segment.

For instance, for concentric circles, there are 5 segments:

The visualization maps 5 out of 7 audio channels and lights up LEDs progressively according to their position in the circular band proportionate to the level of sound in the band.

For instance, this is how the data structure for visualization 1 looks like in the sketch:

So far there are 7 visualizations and a start-up animation:

When the device is turned on, an imitation of a firework is displayed. This was supposed to be a LED and Servo test sequence, but later evolved into an animated version of such test

The lights go around the display in concentric circles proportionate to the amplitude of the respective eq band. Randomly switching between clock- and counter-clock-wise and slowly rotating the colors over the 256 color wheel

One band is the center LED. Another band is the vertical and horizontal lines of LEDs, and the remaining segments representing each an EQ band. All segments are rotating colors in 128 offset to remain contrast.

Each circle lights up all LEDs in unison for a dedicated eq band, while slowly rotating colors with a slight offset. EQ bands are progressively shifted from one circle to the next creating outward progression.

The bands are semi-circles lit up from the bottom to the top starting with a bright red and adding yellow on the way up simulating a burning fire in a fireplace. Occasional bright white "spark" randomly shoots up. There is no color rotation

Each concentric circle is a separate EQ band. The leading LEDs are the ones on the vertical line below the center LED. Once the LED is lit proportionate to the band amplitude, it starts "running" around the respective circle slowly decreasing intensity. Both clock- and counter-clockwise rotations are supported, switching randomly.

The segments are lit in a straight line from bottom LED up and then sideways in concentric semi-circles imitating palm trees. Color rotation.

This is a version of the previous Maltese Cross with only 2 diagonal segments used. Supposed to resemble the icon for sound waves.

There are 4 touch-sensitive buttons:

In dancing mode, the device will try to detect the "beat" of the currently playing music and turn its head according to the beat. So far the "dancing" is rather awkward than beautiful, to be honest.

The device is constantly trying to detect the "beat" of the current tune as a distance between consecutive peaks of the 63Hz band. Once detected (and only if the dance mode is ON), the device will activate its servo motor to randomly turn left or right according to the beat.

Any bright ideas on how to make this more reliable are welcome!

The original design is located here. The "files/3D" folder on github.com contains the STL models.

This design illustrates how the device looks assembled.

All of the components were printed and then assembled/glued together.

The battery compartment is printed specifically for the type of battery mentioned in the Supplies section. If you choose to use a different battery, the compartment will have to the re-designed accordingly.

The battery compartment is designed in such a way that it detaches from the rest of the device and could be replaced with the one designed for a different type of battery.

The USB plug was positioned and hot-glued in place to connect the battery as it slides in.

An HC-05 module is added to provide a way to control the device wirelessly.

When on, the device creates a Bluetooth connection called "LEDDANCE", which you can pair your phone with.

Ideally, there should be an App that allows controlling PartyLights (choosing a color palette, simulating button presses, etc.). However, I have not written one yet.

If you are interested in helping writing an Android or iOS App for Party Lights, please let me know!

To control the device, you can currently use the Bluetooth terminal app, and send the following commands:

LEDDSTAT - returns a 3 character number consisting of '0's and '1's only:

Step 10: Control App Based on Blynk

Blynk (blynk.io) is a hardware-agnostic IoT platform. I used Blynk in my IoT Automatic Plant Irrigation System tutorial and was impressed with the ease and robustness of the platform.

Blynk supports connecting to edge devices via Bluetooth - exactly what we need for PartyLights.

If you have not already, please download Blynk App, register and recreate Blynk PartyLights App using the screenshots attached to this step. Please make sure the virtual pin assignments are the same as on the screenshots, otherwise, the buttons on the app will not work as intended.

The file "blynk_settings.h" contains my personal Blynk UID. When you create your project, it will be assigned a new one fo you to use.

Upload the PartyLightsBlynk.ino sketch, fire up the App. Pair with Bluetooth device and enjoy the party.

The main sketch and supporting files are located on Github.com here.

The following libraries were used in the Party Lights sketch:

This Wiki page explains how to use STM32 boards with Arduino IDE.

A few things could be improved in this design, which you might consider if you embark on this project: