For 3 weeks I've been thinking about this build: 1Sheeld / Alamode / AdafruitDCMotorShieldv2.3 / Raspberry PiB+.

What Do I Build Next? Part 3: 1Sheeld/Alamode RasPi Robot

What Do I Build Next? Part 3: 1Sheeld/Alamode RasPi Robot

For 3 weeks I've been thinking about this build: 1Sheeld / Alamode / AdafruitDCMotorShieldv2.3 / Raspberry PiB+. 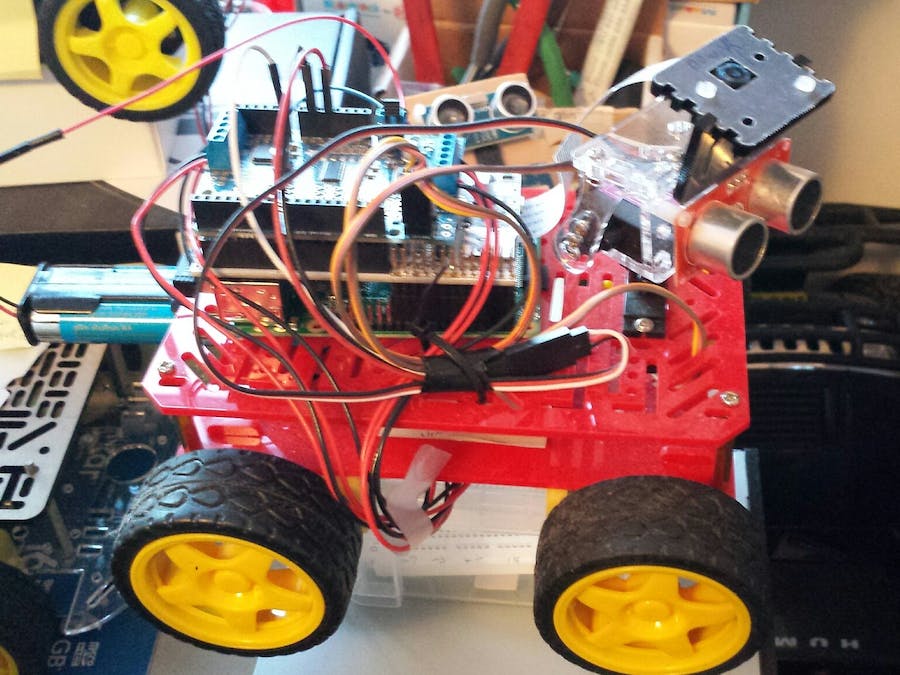 I was going through an ambitious period (but that was 6 months ago, and before April), many robots were built using similar technology, code and hardware. Adaptability has also been my goal. I gathered many DC Motor Control boards to use with the Raspberry Pi and/or Arduino clone IO boards. Now the use of 1Sheeld, an Alamode, an Adafruit DC Motor Shield, a 4-Wheeled Magician Robot chassis, a 2 servo Pan-n-tilt with a PiCamera and a HC-SR04 Ultrasound module, some recycled Arduino/HTML code on a PiZero or Raspberry Pi-2 B+ or Pi-3.

Just a brief update, for the past 6 months I've been "upgrading my house". I removed carpets, sanded and poly'd floor, then came the painting of whole 1st floor. My "robot room" has only just been cleared out so I can again begin or finish some projects.

The Raspberry Pi uses the latest Raspian Pixel download with updates. I had enabled SSH, Camera, and all advanced features in Raspian Configurator. Not all were necessary for this project.

This does require a seperate battery pack for the DC Motors and servos and one for the Raspberry Pi due to power issues causing "brown-out" and the subsequent Pi reboot.