Distracted driving is a killer we don't pay attention to until its to late. This device helps bring to light how distracted we really are.

Distracted driving is a killer we don't pay attention to until its to late. This device helps bring to light how distracted we really are. 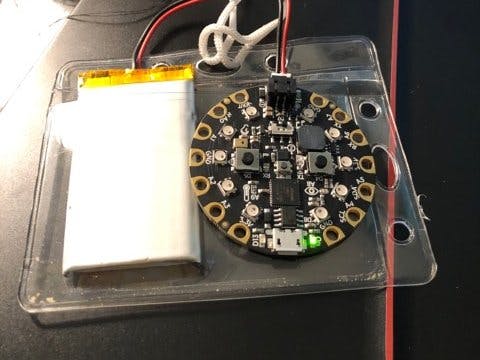 in 2017, 3166 lives were taken by distracted driving. It's a growing epidemic that scares me terribly because my father is a commercial bus driver. What if one day he got into a wreck because someone else was distracted and caused my dad not to come home to me. Texting and driving is known as the biggest distracted driving scenario, but did you know that too much noise from the radio or the passengers can be just as deadly. I wanted to make a protest piece to bring into light of how distracting noise from the radio can be,

My device will go off if the radio or the volume in the car reaches a low decibel. If I had more automotive knowledge I would have set some thing up in the car that triggered a sensor to go off or even turn off the car if the level gets too high. I used the audio sensor in the CPX, the output is a red light and sound that makes it seem like something in your car is going off.

I had problems finding housing for my CPX, originally I wanted to put my device in a pair of fuzzy dice but I believe the dice were muffling the audio sensor because of the dampening affects fabric give with sound waves.

Then I moved to the idea of putting it in a eyeglasses clip. I believe the problem here was that the sensor wasn't in the optimal place to get the sound since I had the volume at max in the car and It wouldn't go off. It did go off if I put it on the dash closer to the speaker.

I then moved on to the idea of hanging it from the rearview mirror and had a air freshener holder that the CPX fit into but the battery did not.

I moved to a lanyard pouch and made a string to go around the mirror and it fit the CPX and the battery very nicely. I know its not very creative but like I said in the beginning, if this was a reality I would have had it installed into the car completely but I have no automotive experience.