A basic Arduino-controlled model railway layout with an oval loop and a yard siding to house a train, working in an automated sequence.

A basic Arduino-controlled model railway layout with an oval loop and a yard siding to house a train, working in an automated sequence. 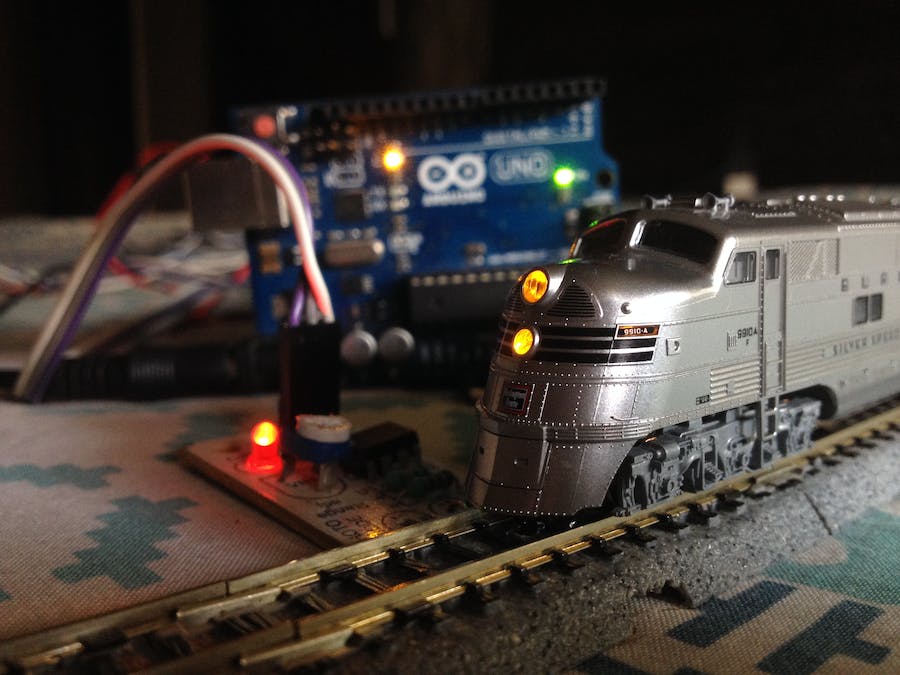 This project is an upgraded version of one of my previous projects. This uses an Arduino microcontroller, a great open-source prototyping platform, to automate a model railway layout. The layout comprises of a simple oval loop and a yard siding branching out from it to house the train. The Arduino microcontroller gets feedback from two 'sensored' tracks installed at two locations of the layout to carry out specific functions when the train crosses over them.

So, without further ado, lets get started!

Watch the above video to understand how this project works.

Step 2: Get All the Parts and Stuff

For this project, you will require:

Step 3: Program the Arduino Board

Make sure you have the Adafruit motor driver shield v2 library installed in your IDE. Go through the Arduino code to get an idea of how it works and how you can modify it in the future to experiment with the setup.

Connect the Arduino board to your computer and upload the attached Arduino code on it.

Click on the above image before proceeding to get more info about the layout. Make sure all the rail joints are properly made and the track's rails are cleaned to prevent the train from derailing and/or stalling.

Step 5: Install the Motor Shield on the Arduino Board

Step 6: Connect the Track Power Feeder and the Turnout Wires to the Motor Shield

Connect the output terminals of the shield marked as M1 to the track power wires and those marked as M4 to the turnout wires. Make note that the setup is compatible with only two wire solenoid type turnouts.

Step 7: Connect the 'Sensored' Tracks to the Arduino Board

Install the expansion shield on the motor shield and connect each sensor's GND and VCC pins to the GND and +5-volt headers of the shield. Then make the following pin connections:

Step 8: Place the Train in the Siding

Place the train in the yard siding to prepare for the test run. Use of a rerailer tool is recommended to ensure that the locomotive and the rolling stock are placed properly on the tracks to prevent derailments.

Step 9: Connect the Arduino Board to Power

Connect the 12-volt DC power source to the Arduino board either through the power terminal block of the motor shield or the female barrel jack connector of the Arduino board. Before turning on the power, make sure all the wiring connections are made correctly and none of them are loose.

Step 10: Turn On the Power and Watch Your Train Go

After turning on the power if the turnout switches the wrong way or the train starts to move in the wrong direction, reverse the polarity of the respective wires connected to the motor shield's output terminals.

If you have reached this far, you might want to relax a bit and enjoy your project. But if you want to do more stuff then you can try to modify the Arduino code and experiment with the setup to do something new. Whatever you do, all the best!