An upgraded version of a previous project which now has a yard siding to house the train.

An upgraded version of a previous project which now has a yard siding to house the train. 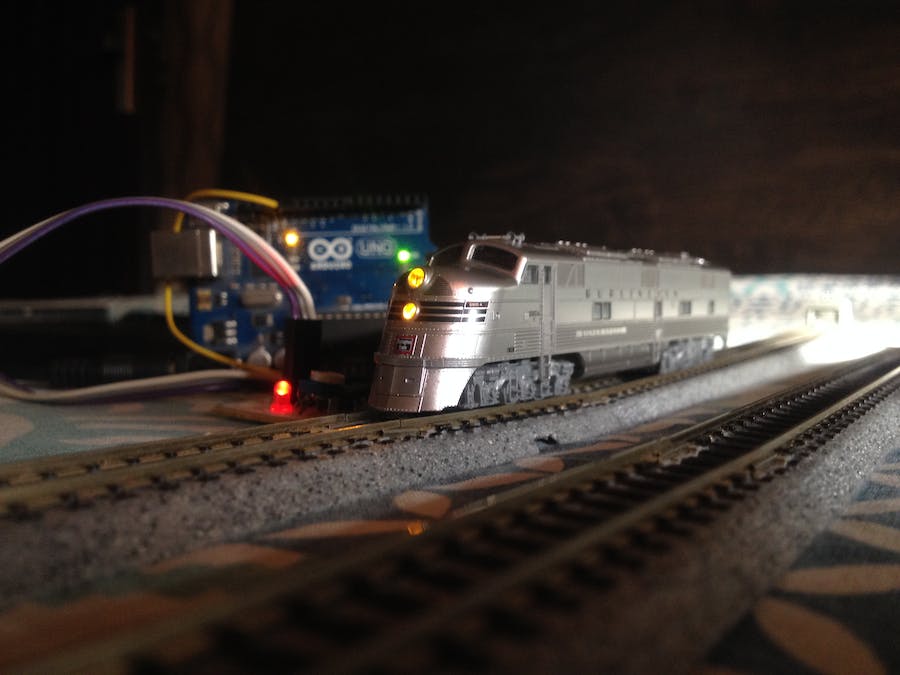 Arduino microcontrollers open great possibilities in model railroading, especially when it comes to automation. This project is an example of such an application. It is a continuation of one of the previous projects. This project comprises of a point to point model railroad layout with a yard siding to house a train. All of the operations are controlled by an Arduino microcontroller board with the help of feedback mechanism and the train and the turnout is controlled by an Adafruit motor shield.

Watch the video to get an idea of how this works. So, now you know what's going on, let's get started!

Step 2: Get All the Stuff

Here is what you will require for the build:

Make sure you have the Adafruit motor shield library installed in your Arduino IDE. You can get full documentation about the motor shield and necessary software from this link.

Step 5: Install the Motor Driver Shield on the Arduino Board and Connect It to Track Power and Turnout

Connect the output pins of the shield marked as M4 to the track power wires and those marked as M3 to the turnout wires. Make note that the setup is compatible with only two wire solenoid type turnouts.

Step 6: Wire Up the 'sensored' Tracks

Install the expansion shield on the motor shield and connect the sensors' GND and power wires to GND and +5V rails of the shield respectively. Make the following pin connections:

Make sure no pins are loose to avoid malfunctioning of the system.

Step 7: Connect the Arduino Board to Power and Turn It On

Connect a 12V DC power source to the Arduino using a barrel jack and power it up.

Step 8: Place Your Locomotive in the Siding and Slide It Over the 'sensored' Track

The Arduino board is programmed to start the layout operation only after the locomotive has been placed in the yard and it gets to 'know' this only through the feedback from the 'sensored' track. Make sure you watch the video, in the first step, to understand it better.

After the 'sensored' track detects the locomotive, you should see that the turnout will switch to the siding if it is not and the locomotive will start to move forward.

If everything was done correctly, your train should start to move from the yard siding on the mainline and proceed as shown above.

Got your train running? Don't stop here! Try upgrading the setup to run the train between more points, change the acceleration and deceleration rate of the train, tweak with the Arduino code, there is a lot to do. All the best!