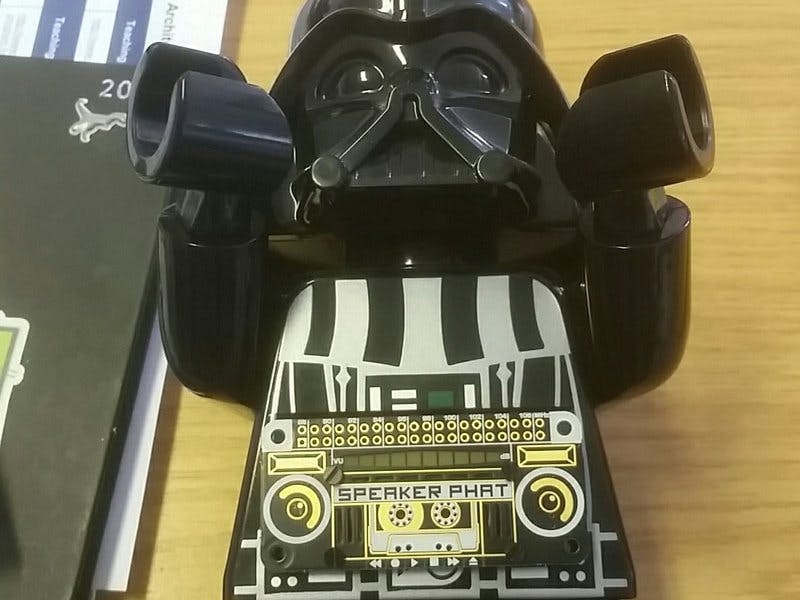 Darth Beats started off as a Lego mini figure alarm clock, which you can still buy from all major retailers.  The Pi Zero W is the perfect size to embed into projects and boasts both WiFi and Bluetooth.  The pirates at Pimoroni have created the awesome speakerpHAT, which adds portable audio to your Pi. These two pieces of hardware combined with an old Lord Vader, sat on a shelf gathering dust, equal a winning project,

The most challenging part of the project, which tested my resilience and perseverance. was fitting all the hardware, (Pi, speaker pHAT, wires, more wires, buttons) into such a small space, which measures only 6 x 3 x 3 cm.  I had to use the Dremel tool to remove a lot of the insides and make room for the Pi and other hardware.  This was going well until the SD card still protruded too much.   The wires also had to be soldered, de-soldered, cut and resized and re soldered to ensure that all them would fit neatly into the space and still work.

Then the power cable needed fitting which meant that the Pi had to be rotated to ensure that the microUSB pointed upward.  At one stage I managed to successful embed and fit in all the kit and close the case, only to discover that I had left Lord Vader's arms off!

The main MP3 program is coded in Python and makes use of PyGame to control the MP3s and adjust the volume.  The awesome GPIO Zero library adds functionality to the physical buttons  and enables you to turn off or shutdown the MP3 Player when you are finished.  A simple file server Droopy, is used to created a web based file upload system to allow all users to upload and add more MP3s.  Finally a crontab lists the programs to run at boot up so that Vader Beats automatically starts on powering up the Raspberry Pi.   "What is they bidding my Master?"