Record the changing temperature and humidity values in Excel using Surilli Basic M0 and a tool named as "Tera Term."

Record the changing temperature and humidity values in Excel using Surilli Basic M0 and a tool named as "Tera Term." 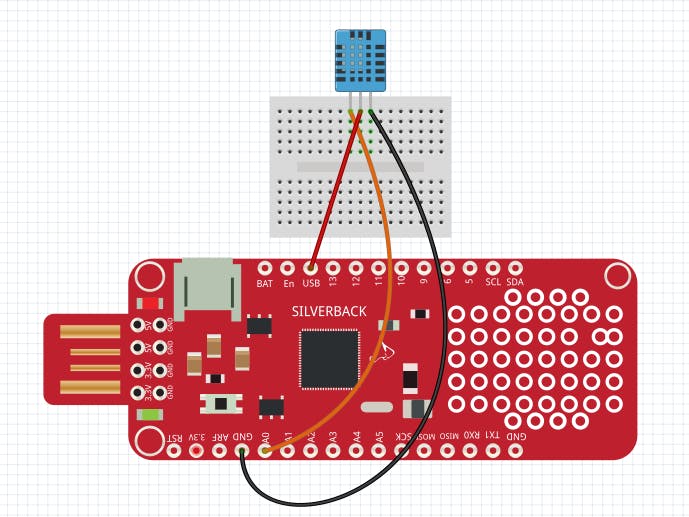 The DHT11 measures temperature with a surface mounted NTC temperature sensor (thermistor) built into the unit.

The DHT11 uses just one signal wire to transmit data to the Arduino. Power comes from separate 5V and ground wires. A 10K Ohm pull-up resistor is needed between the signal line and 5V line to make sure the signal level stays high.

There are two different versions of the DHT11 you might come across. One type has four pins, and the other type has three pins and is mounted to a small PCB. The PCB mounted version is nice because it includes a surface mounted 10K Ohm pull up resistor for the signal line. In this tutorial, we will use 3 Pins DHT11.

Ranges and Accuracy of DHT11 Sensor:

Tera Term is one of the more popular Windows terminal programs. It's been around for years, it's open source, and it's simple to use. For Windows users, it's one of the best options out there.

You can download any version of Tera Term from the link given below:

You should initially be presented with a "TeraTerm: New connection" pop-up within the program. Here, you can select which serial port you'd like to open up. Select the "Serial" radio button. Then select your port from the drop-down menu. (If this window doesn't open when you start TeraTerm, you can get here by going to: File > New connection).

That'll open up the port. TeraTerm defaults to setting the baud rate at 9600 bps (8-N-1). If you need to adjust the serial settings, go up to Setup > Serial Port. You'll see a window pop up with a lot of familiar looking serial port settings. Adjust what you need to and hit "OK".

The title of your TeraTerm window should change to something like "COM##:9600baud" -- now that's a good sign.

That's about all there is to it. The blank window with the blinking cursor is where data is both sent (by typing it in) and received.

It can be weird to type stuff in the window and not see it show up in the terminal. It's undoubtedly still flowing through the serial terminal to your device, but it can be difficult to type when you don't have any visual feedback for exactly what you're typing. You can turn on local echo by going to the Setup menu and selecting Terminal.

Check the Local echo box if you'd like to turn the feature on.

There are other settings to be made in this window as well. You can adjust the size of the terminal (the values are in terms of characters per row/column), or adjust how new-lines are displayed (either a carriage return, line feed, or both).

If you want to clear your terminal screen you can use either the "Clear buffer" or "Clear screen" commands. Both are located under the Edit menu.

Clear screen will do just that, blank out the terminal screen, but any data received will still be preserved in the buffer. Scroll up in the window to have another look at it. Clear buffer deletes the entire buffer of received data -- no more data to scroll up to.

Menus are a pain! If you want to get really fast with TeraTerm, remember some of these shortcuts:

Set Up Arduino IDE for Surilli:

Make sure you have selected the right port, board and processor for the Surilli as shown in the picture below and it is programmable (compile and upload “Blink” from File>Examples>Digital>Blink onto your Surilli to check if everything is working fine).

The circuitry is quite simple. Its mostly the programming. Follow the figure below to set up your hardware.

In my case, the values of both temperature and humidity in Excel were recorded as follows:

Note: You can make the necessary changes / modifications in the Arduino Code according to your requirements and see how it reacts to different values and logic.

That’s all for now. If you have any queries, visit surilli.io or contact our support.