Control the blinking action of an LED using an IR receiver and a remote control.

Control the blinking action of an LED using an IR receiver and a remote control. 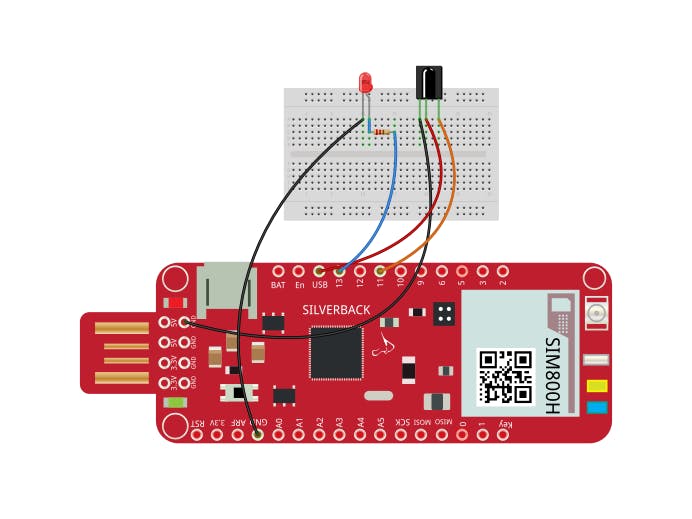 In this tutorial, we will use an infrared (IR) Receiver and along with Surilli GSM and Arduino to control the LED using a Remote Control. This is useful to re-use old remote controls or give some functionally to some of your remote’s buttons.

Infrared (IR) communication is a widely used and easy to implement wireless technology that has many useful applications. The most prominent examples in day to day life are TV/video remote controls, motion sensors, and infrared thermometers.

There are plenty of interesting Arduino projects that use IR communication too. With a simple IR transmitter and receiver, you can make remote controlled robots, distance sensors, heart rate monitors, DSLR camera remote controls, TV remote controls, and lots more.

What Is an Infrared?

Because IR is a type of light, IR communication requires a direct line of sight from the receiver to the transmitter. It can’t transmit through walls or other materials like WiFi or Bluetooth.

How IR Remotes and Receivers Work

A typical infrared communication system requires an IR transmitter and an IR receiver. The transmitter looks just like a standard LED, except it produces light in the IR spectrum instead of the visible spectrum. If you have a look at the front of a TV remote, you’ll see the IR transmitter LED.

The same type of LED is used in IR transmitter breakout boards for the Arduino.

The IR receiver is a photodiode and pre-amplifier that converts the IR light into an electrical signal.

IR light is emitted by the sun, light bulbs, and anything else that produces heat. That means there is a lot of IR light noise all around us. To prevent this noise from interfering with the IR signal, a signal modulation technique is used.

The modulated IR signal is a series of IR light pulses switched on and off at a high frequency known as the carrier frequency. The carrier frequency used by most transmitters is 38 kHz, because it is rare in nature and thus can be distinguished from ambient noise. This way the IR receiver will know that the 38 kHz signal was sent from the transmitter and not picked up from the surrounding environment.

The receiver diode detects all frequencies of IR light, but it has a band-pass filter and only lets through IR at 38 kHz. It then amplifies the modulated signal with a pre-amplifier and converts it to a binary signal before sending it to a microcontroller.

The NEC protocol is also the most common type in Arduino projects, so I’ll use it as an example to show you how the receiver converts the modulated IR signal to a binary one.

This is how the NEC protocol encodes and decodes the binary data into a modulated signal. Other protocols differ only in the duration of the individual HIGH and LOW pulses.

Each time you press a button on the remote control, a unique hexadecimal code is generated. This is the information that is modulated and sent over IR to the receiver. In order to decipher which key is pressed, the receiving microcontroller needs to know which code corresponds to each key on the remote.

Different remotes send different codes for the key presses, so you’ll need to determine the code generated for each key on your particular remote. If you can find the datasheet, the IR key codes should be listed. If not though, there is a simple Arduino sketch that will read most of the popular remote controls and print the hexadecimal codes to the serial monitor when you press a key.

When you press your remote control, it sends infrared modulated signals. These signals contain information that your receiver collects.

Each button sends specific information. So, we can assign that information to a specific button.

Set Up Arduino IDE for Surilli

Make sure you have selected the right port, board and processor for the Surilli as shown in the picture below and it is programmable (compile and upload “Blink” from File>Examples>Digital>Blink onto your Surilli to check if everything is working fine).

1. First of all download the IR Remote Library from the link given below:

2. After downloading the library, you should have a .zip folder in your downloads folder.

3. Now open your Arduino IDE and then navigate to Sketch on the upper toolbar and then select "Include Library."

4. After that select "Add .zip library..." and select the .zip file that you have just downloaded.

5. After doing this, you will see a message in below blue region that the file has been included into your documents folder.

6. Now, close Arduino IDE and then navigate to Documents-->Arduino-->libraries. There you will see that the library has been added to the default libraries of Arduino IDE.

7. Open Arduino IDE again and then go to Sketches --> Include Library and just below "Add .zip library...", you will see your library.

Upload and Burn Code Onto Surilli

Now you have completed setting up your hardware and Arduino IDE. Copy and paste the Arduino sketch given below into your Arduino IDE. Make sure that you have the right board and COM port selected.

After uploading the above code, open the Serial Monitor at a baud rate of 9600.

If you press number 0 of your TV Remote, some codes will appear on the Serial Monitor which will be in decimal form and at the same time, the LED will remain OFF.

Similarly, if you press 1 of your TV Remote, some codes in decimal form will appear on the Serial Monitor and at the same time, you can see that the LED will be ON.

Play with the program to see how it reacts to different values and logic.

If you make something fun and interesting, do share it with our community.

That’s all for now. If you have any queries, visit surilli.io or contact our support. Stay connected with the Surilli family for more amazing stuff. :-)