Use Arduino and Raspberry Pi to get notified if a hot water heater pilot light goes out.

Use Arduino and Raspberry Pi to get notified if a hot water heater pilot light goes out. 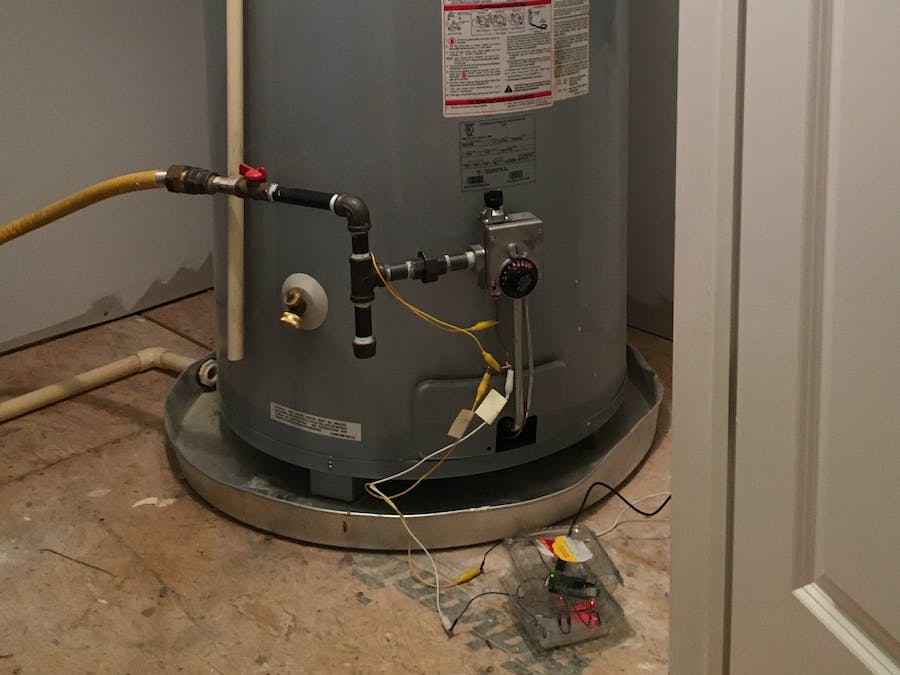 Traditional gas hot water heaters maintain a pilot light 24x7. This pilot light heats a thermocouple which generates a small voltage (up to 30 millivolts). This voltage is used by the hot water heater thermostat to hold open a gas valve. If the pilot light blows out, the voltage stops and the gas valve is automatically closed.

In my hot water heater, the pilot light blows out occasionally. Since this only happens around 3 times per year, I don't want to replace the expensive hot water heater. I tried replacing the thermocouple, but this did not solve the problem.

My solution: monitor the voltage generated by the thermocouple. If it falls to zero, send texts and emails so I can relight the pilot light. Remember, there is no danger of gas leak here, because the gas valve will get closed whenever the thermocouple voltage drops to zero.

A Raspberry Pi Zero WH will be used to send emails & texts when the pilot light goes out. Because the Raspberry Pi does not have a way to measure voltage, an Arduino Nano is used to monitor the voltage from the thermocouple.

Arduinos have analog-to-digital converters (ADCs) that can read a voltage and convert it to a number between 0 and 1023. In this project, the Arduino reads the voltage from the thermocouple and communicates this value to the Raspberry Pi. The Raspberry Pi receives the voltage reading and interprets it. If the value is too low, we assume the pilot light has gone out and send notifications.

Get the Raspberry Pi up and running on your network (you can check my other project for instructions for doing this).

Create a Python program that will receive voltage readings from the Arduino. The program will loop and send notifications when the voltage reading is too low. Source code is attached.

I bought cheap Chinese Arduino Nanos, so it took some trial and error to get these working with my Windows 10 computer.

Step 3: Connect the Arduino to the Voltage Source

The thermocouple sends voltage to the hot water heater thermostat via a coaxial wire. The outside of the wire is positive.

I used 1 foot long wires with alligator clips on the ends to make the connections.

The two wires at the bottom go to the Arduino. The top yellow wire just connects the outside of the wire to itself, traversing where I had to cut the wire.

Step 4: Connect the Arduino to the Raspberry Pi

Our sketch running on the Arduino will transmit the voltage number from the ADC to the Raspberry Pi. The Arduino will send the signal as output from its digital pin 9.

Arduinos send signals at +5V. The Raspberry Pi can only receive a 3V input. Therefore, between the Arduino and the Raspberry Pi, there must be a voltage divider. This reduces the voltage from 5V to about 2.8V.

A voltage divider is a system of resistors that reduce the input voltage.

The output voltage is determined by the the voltage divider relationship.

The ground wires of everything must be connected. See the connection diagram.

Every 30 seconds the Arduino sketch gets the voltage measurement from the ADC and transmits the number to the Raspberry Pi. I decided to use a primitive, single-wire signaling system from Arduino pin 9 to Raspberry Pi pin 16.

The Raspberry Pi uses a Python program with an infinite loop to listen for rising edges on pin 16. When a rising edge is detected, it is assumed that the Arduino has begun transmitting a number.

Signaling System
Transmit a two digit number (ex: "12"). Each digit is preceded by a positive pulse received on pin 16. Subsequent positive pulses separated by less than 20 milliseconds (ms) increment the value of this digit. A pause over 40ms indicates that this digit is complete, and the next digit begins. Another pause over 40ms indicates that the second digit is complete. The entire two-digit number is now complete.

To send text alerts, I used a feature that most cell providers provide: the ability email a text to their users. Ex: for Verizon: 5555555555@vtext.com sends a text to that number.

Gmail
I created a new Gmail account to use for sending the notifications. At first, I configured the security settings on this Gmail account to allow 'less secure' access, so the Python code could send emails. However, after a few months, Gmail may disable this less-secure access. I discovered that Gmail prefers users to use app passwords.

Connect the Arduino to the hot water heater thermocouple wire and to the Raspberry Pi via the voltage divider. (The top part of my voltage divider uses two resistors that total 550 ohms—because those are the resistors that I had on hand.) Power on the Arduino and it will begin measuring the voltage and sending signals to the Raspberry Pi every 30 seconds.