A motion control setup to allow a disabled user to use an Android tablet.

A motion control setup to allow a disabled user to use an Android tablet. 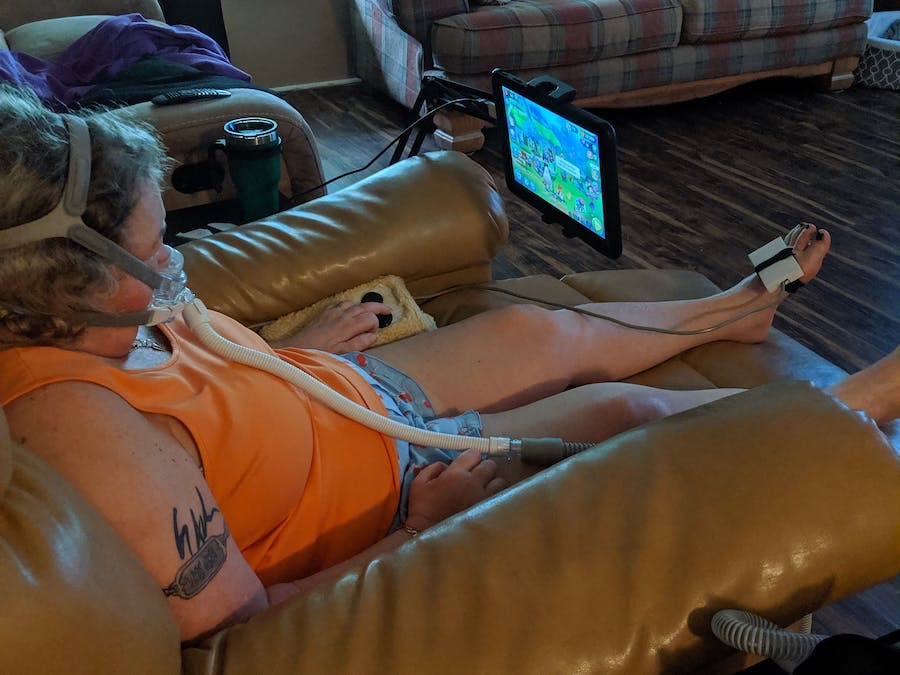 This project uses an Adafruit Feather 32u4 Bluefruit LE to act as a HID mouse for an Android tablet. For movement input it uses the Adafruit LIS3DH Triple-Axis Accelerometer attached to the user's foot. There are two simple arcade buttons used for left click and a scroll toggle.

Several years ago my mother was diagnosed with ALS. Since then she has slowly lost the function of her limbs. She loves the Android game Fishdom and at first she could play it normally. As she lost function she could no longer use the touchscreen to control the game. At that time I made a wired version of this controller using an arcade joystick to control the mouse movement, and the same two buttons to act as a click and a scroll toggle. As time when on she lost more function and the joystick became hard to use. She still has pretty good movement of her foot when in her chair so I decided to try and use an accelerometer to control the mouse movement. Once I got that working I wanted to make it wireless to the tablet so that she wouldn't have to stop playing to charge the tablet.

The code by this time was getting a little large and I didn't want to break something while trying to implement a new feature or while tweaking a setting so I figured it was time to finally learn Git. The bulk of the code was written in the Arduino IDE, I then discovered VSCode and its Git integration and have starting using it for my development.

With any luck this project may help another disabled person have some entertainment.

The Feather and buttons are housed in a card box. The accelerometer is housed in a jewelry box which has a hair tie glued to it. This is then placed on the users foot. Each box has a Cat5 keystone attached to it and the boxes are connected via a Cat5 cable. In future implementations I would like to replace the Cat5 cable with something smaller (I only need 4 wires) while still maintaining the ability to easily disconnect the accelerometer from the rest of the unit.

The accelerometer is acting much like a d-pad. I'm not concerned with the amount of movement or the specific angle, just that it is tilted left/right or up/down. There also needs to be a resting position that the user can keep the accelerometer at in order to stop cursor movement. The user also needs a way simulate a finger drag. This can be done with just the main button and moving the accelerometer but it is slow. To facilitate faster scrolling of long forums and web pages (Facebook) a scroll mode is implemented. While in this mode the cursor stops moving and the entire page is moved up/down or left/right with the movement of the accelerometer.

In addition to the Adafruit libraries for the Feather and the accelerometer I used the PushButton library from here. This is a convenient library for debouncing and detecting clicks, double clicks, and holds. I had (and still do) have a hard time getting the Bluetooth to initialize and connect, BluefruitRoutines.h comes from this project and includes an initializeBluefruit() function that works wonderfully so its included here. I would like to eventually integrate this into my main ino.

There are several #define statements I use to help fine tune the project. As movement is limited and will continue to deteriorate I wanted an easy way to adjust cursor speed, deadzone size, etc.

The RANGE constant determines how far the mouse moves with each move command (essentially how fast the cursor moves). RESPONSEDELAY is a little delay at the end of the loop before it reruns this affects how fast the program is overall (may not be strictly necessary at this point). The AVERAGEFACTOR constant determines how many data points to get from the accelerometer before checking for movement. The accelerometer is quite noisy so several captures are taken and averaged out before determining its location. CALIBRATIONFACTOR is how many times we poll the accelerometer to determine a resting position (see calibration() function). DEADZONE is a threshold the accelerometer must pass before we register a movement. This is needed so that when the user is at rest the cursor will stay in one location instead of jumping around. You can set MAINBUTTONPIN and SCROLLBUTTONPIN to whatever pin you want to use for those buttons.

I tried to minimize the use of global objects and variables to avoid any unintended changes in the code. The way the Arduino loop() works necessitates some though.

There are two buttons for the user to manipulate scrollButton and mainButton. mainButton acts like left click on a mouse, while scrollButton is used to toggle in and out of scroll mode. A switch would also work well for scrollButton but my user doesn't have the coordination to manipulate a switch. lis is the accelerometer object. This is used to get all the movement data from the accelerometer. The xCalibrated and yCalibrated variables are used to hold the resting (no cursor movement) accelerometer values. The xDistance and yDistance variables are the amount of movement on each axis. bolScroll keeps track of whether the user is in scroll mode or not. Finally the ble object is created in BluefruitRoutines.h and it is used to actually send the commands to the tablet.

In order to facilitate easier future transitions as movement degrades and new ways of controlling the cursor have to be devised, I've tried to keep the code modular and use functions when I can.

The averageX() and averageY() functions pull data from the lis object multiple times (AVERAGEFACTOR) and then average that data to determine the accelerometers position. This is done to reduce the noise of the accelerometer data. The calibrate() function pulls data from the lis object CALIBRATIONFACTOR number of times and averages that all together to determine a resting position for the sensor. It is called during setup() and can be called again by pressing mainButton and scrollButton simultaneously. The user may want to recalibrate if the cursor starts to drift while in a resting position. The checkXmovement() and checkYmovement() functions are called to determine if there is enough movement in the accelerometer to warrant a cursor movement. It does this by calling the averageX() or averageY() function to get the current accelerometer position. It then compares that to xCalibrated or yCalibrated (the resting position) and if the difference between the new location and the calibrated location is greater than DEADZONE it returns a 1 or -1 depending on the direction of the movement, or a 0 if no movement. In the main loop() that returned value is then multiplied by RANGE to determine the amount of cursor movement. Finally the convertMovement() function takes the amount of movement wanted for the cursor and converts it into a string to be used by the Bluetooth object (ble) and sent to the tablet to make the cursor actually move.

There isn't a lot to do in the setup. First the pins for the buttons are setup as pull up inputs. The buttons are set to active low logic for the PushButton library. The accelerometer is started and its sensitivity range is set. It is then calibrated and lastly the Bluetooth object is initialized.

The main loop() consists of several steps. First it checks the status of the buttons. If one or more of them are pressed it does the corresponding action. Then it checks for movement and if it finds any it moves the cursor. Rinse and repeat.

After the button status is updated the code checks for both buttons being pressed and then if they aren't it checks each individually, this is done to prevent an accidental click or scroll mode change. Depending on if the user presses and releases both in a timely fashion this doesn't always work but most of the time it works fine. In the future I would like to refine this. The way the Feather sends Bluetooth commands is via a string that starts with "AT+" then whatever it is you're trying to do. Documentation on this can be found here. I am also looking for a better way to accomplish this. I've seen some programs use ble.atcommand() but I can't find documentation on how this differs from ble.print(). Also the last bit of code you send via Bluetooth should use the ble.println() command. I had crashing and erratic behavior when I only used ble.print().

There are a few improvements I would like to make to the code and general setup.

This is my biggest project so far and I'm just a hobbyist so I'm sure it doesn't always follow best practices so if you see something please say something so I can improve my code. 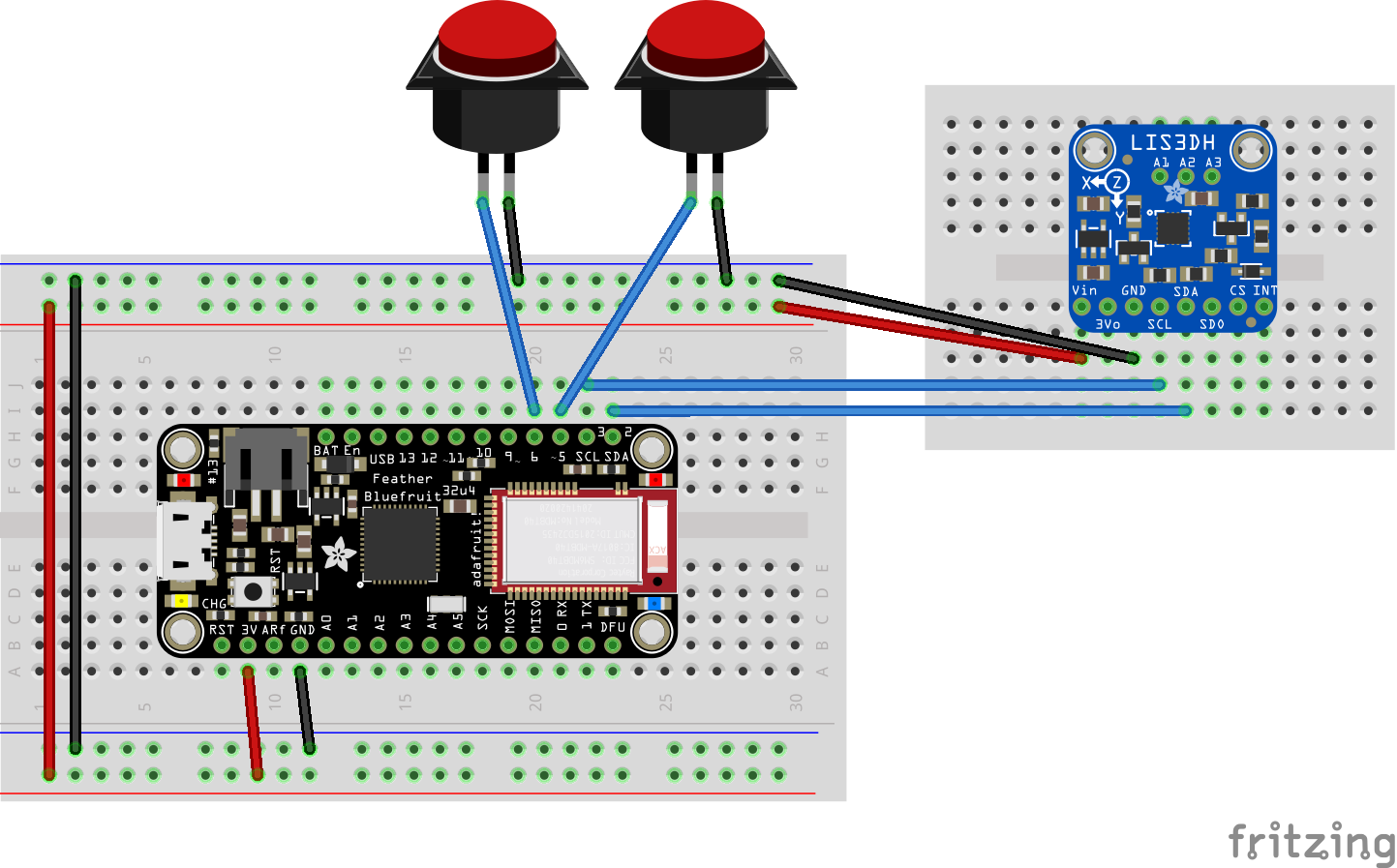