Raspberry Pi has only digital inputs. In this article we read analog data through ADC over SPI.

Raspberry Pi has only digital inputs. In this article we read analog data through ADC over SPI. 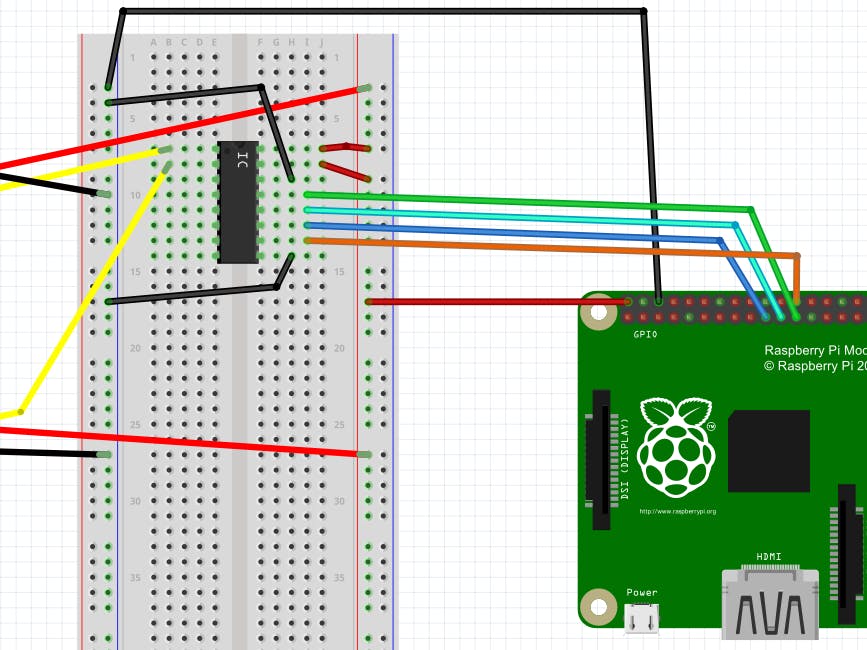 Raspberry Pi has only digital inputs. In this article we read analog data through Analog to Digital Converter (ADC) over Serial Peripheral Interface (SPI).

To connect to the ADC, you need to obtain an instance of SpiDevice from Widows.Devices.Spi namespace. To access this namespace, you need to first add a reference to "Windows IoT Extensions for the UWP"

Adding reference to "Windows IoT Extensions for the UWP"

Alright, let's instantiate the SpiDevice. This code is adapted from the Potentiometer Sensor Sample.

This is boilerplate code where I would pay attention mostly to SpiConnectionSettings. The parameter is the Chip Select line you used earlier in the circuit, and ClockFrequency should not exceed the maximum frequency specified by the device's datasheet. Mode0 seems to work for MCP3008.

Getting data from the SPI device

Now here's the real challenging code, and we'll get into detail. Use TransferFullDuplex to read data from the SPI device. You pass in two byte arrays as parameters; one that tells the device what to do, and another, empty array where the device will put the data.

First, we need to establish the size of the arrays. Let's start with the response buffer:

The ADC response is 10 bits long. We can fit it into 2 bytes. We also add one byte padding. Hence, the response is 3 bytes long.

In SPI communication, for every byte we want to receive, we send one byte. Therefore, the request bytes are also 3 bytes long.

This is where various code snippets I found online get confusing: You can convert 11000 to hexadecimal 0x18. and 110000 to 0x30. Both approaches will work, but the code becomes not maintainable.

To address this issue, we just need to split the data into bytes in a different way: Let's make it such that the first byte contains the initial 1, and the second byte contains the channel selecting pattern. Hence, we will send 0000 0001 1000 xxxx xxxx xxxx (x is don't care), which translates to { 0x01, 0x80, 0 }. Any change of the pattern will be reflected exclusively in the third hexadecimal digit (now 8).

Finally, we must convert the raw response of type byte[] to a more useful type, such as int. What happens in the ConvertToInt method, then?

The datasheet of the ADC says that the device outputs 10-bit chunks of data. This code extracts these ten bytes from the input data array.

Let's illustrate this code by plugging in values into variables. Suppose that byte[] data looks like this: AAAAaaaa BBBBbbbb CCCCcccc, and the ten bytes with actual data are bbCCCCcccc.

These were the biggest obstacles that I had when working with the SPI code. There is some non trivial math in this code, so feel free to or reach out to me on Twitter @HiAmadeus. To see how this code is used, watch Smart Mirror episode 7 - Distance Sensor, ADC, SPI - code.

6 projects • 7 followers
ContactContact
Thanks to Microsoft and contributors.