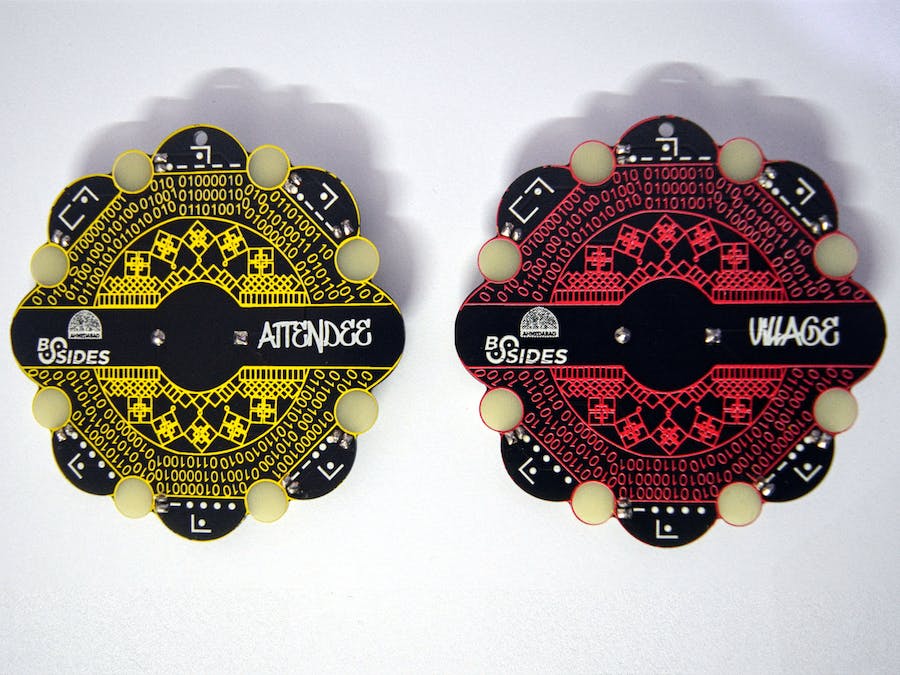 BSides Ahmedabad approached me to design a badge for them. With an outstanding bunch of volunteers, their Twitter was getting flooded with quality memes. So I wanted to make a badge that celebrates tons of memes. And thus came the inspiration from Sacred Games, a popular web series in India.

I began drawing some art that looked similar to Rangoli patterns. That should go in the inner circle. And binary on the outer circle. Some cryptic letters on the outmost corners and little more detailing completed the design. Eight small circles on outermost corners provided nice placement for auto-blinking RGB LEDs on rear side of the badge.

Time to push for production.

How about different colour for crew, speakers and villages?

Of course, how do we forget the tagline?

We never talked about the cryptic puzzle before the conference. It was hidden in plain sight because we wanted to reward those who have a thing for observing details and think differently. And quite a few people noticed the pattern and we rewarded the winning team on stage in conference closing ceremony.

We needed one more badge for soldering village that could teach soldering in a fun, easy way with minimal resources. In the same year, the Indian Space Research Organisation launched its second lunar exploration mission. Thus, I wanted to make it a tribute for them.

We had a phenomenal soldering village and all badges got soldered within just 5 hours.