Prove you are worthy to wield Mjölnir!

Prove you are worthy to wield Mjölnir! 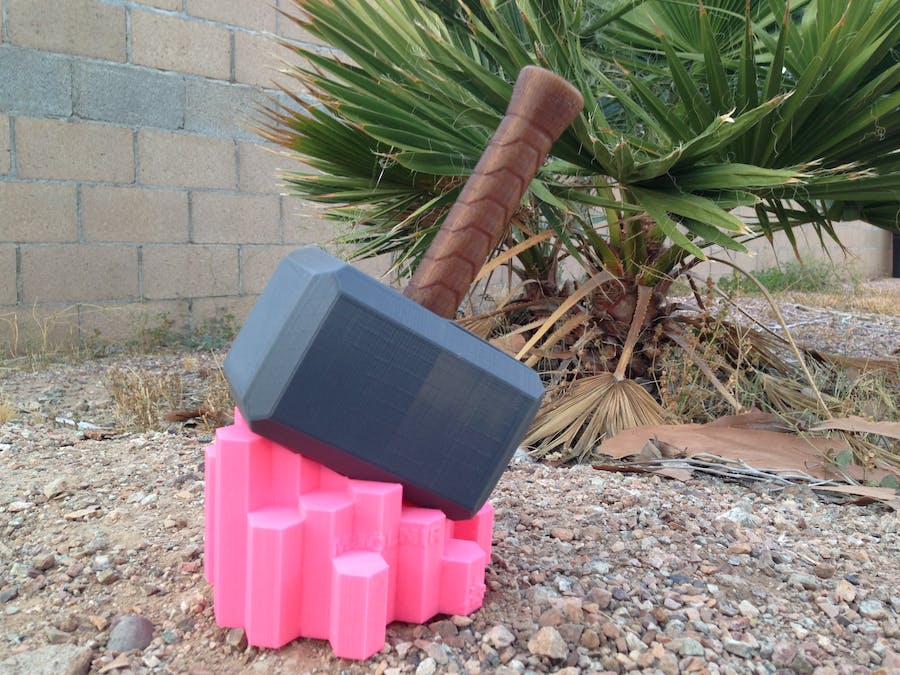 Your ancestors called it magic, but you call it science.  I come from a land where they are one and the same.

That feeling of magic and science is what I wanted to invoke when taking hold of this hammer and watching it light up.  No visible plugs, switches, or any other indication of functionality thanks to inductive charging and reed switches.

Let’s get to do science!

Files for Mjölnir can be found on Thingiverse, YouMagine, and Cults3D.  I was aiming to have everything printable without supports, and succeeded on all counts with exception of the ring, which was a spectacular failure the first time I tried.

5/31/2016 UPDATE: Mjölnir has been vetted & approved, and is now also on MyMiniFactory!

The hammer internals can fortunately both be printed at the same time.  15% infill will work well.

They look a bit like a rattle now that I think of it.

Both sides of the hammer can be printed with 15% infill in the orientation shown.

Buckle up, you're going to be in this for a while.

While not completely necessary, I used 30% infill on the handle.  Used Wound Up by 3Dom USA, and the finish turned out really nicely at this percentage.

The charging station parts were tricky to design without the need for supports, but were successful in the end.  Infill at 15% again, and you may want to give it a brim setting to hold all the edges down to the bed.  Orient them as shown.

The obligatory Drachenberg Crest in on this part.

The ring is by far the quickest component to print out, but was also the trickiest, and I caved and threw supports and brim settings on it.  15% infill will work just fine.

So close, but so far with this one.

Background and Prep on LEDs

Adafruit has a great overview on LEDs, that along with their Circuit Playground app, gave me the guidance I needed before embarking on this quest.

Anyone else think it's weird that 27 Ohm is the "standard value?"

To keep things simple, the chosen LEDs have only an anode and cathode.  Trim the cathode and solder the resistor to it.

Solder a length of wire to the other end of the resistors.

Wire up the reed switch to the charging board, and connect both of the LED/resistor combos in parallel to complete the circuit.

Pretty basic circuit. My drawing is kinda crap though. I'm working on figuring out the best way to show these things.

Components may vary, so a multimeter is essential here.  For the sake of brevity, I’ll only say this once: CHECK ALL YOUR CONNECTIONS BEFORE AND AFTER SOLDERING.  If you’ve never used a multimeter before, have no fear and refer to this handy guide.

Connect the red wire on your inductive charging output to “1” on the micro USB, and black to “5.”

Before wiring the DC barrel jack, check your power adapter to make sure you understand which end is positive and which is negative.

Connect the battery and inductive charging parts to the LED circuit, and fit inside (not shown: wires or micro USB).

It's going to be tight... No seriously.

You may need to maneuver the wires and boards so that they fit properly within.  If it helps at all, it was difficult for me to do too.  This is the price I pay for giving myself silly benchmarks like, “no supports or screws.”

Everything has a place.

Handle will snugly slide over the internals, and the hammer pieces will snap together.

I really like the way the hammer fits together. A small part of the design was serendipitous.

Slide the induction ring into the slot, and use a small crescent wrench to mount the DC barrel jack to the back side of the charging station.

Snap housings together with the center piece.

Fit magnet inside.  This might be a good place for glue if it’s not very snug.  Last thing you need is a ring that doesn’t work and an errant magnet.  Especially if you’ve got small kids around.

If you handle credit cards while wearing this, it would technically be a ring of de-worthiness. ...I'll show myself out.

Show all your friends that you alone can bring Mjölnir to life!  Scoff at their feeble attempts and queries into the secrets of wielding this legendary weapon!

When you run out of power, return Mjölnir to the charging station (make sure it’s plugged in).  Be careful to follow proper LiPO Battery practices to prevent damage or overcharging.  If you stuck with 15% infill on the hammer housing, you should be able to see a green LED light up inside, indicating the battery is fully charged.

If you enjoy what you see here and want to keep updated on projects and posts, give me a follow on twitter @DragonMtnDesign.  Have a question or comment?  Leave those below.  If you really enjoyed this, consider donating on my Cults3D page… you know, for Asgard?