The IotStat is a homemade thermostat with Wifi capabilities!

The IotStat is a homemade thermostat with Wifi capabilities! 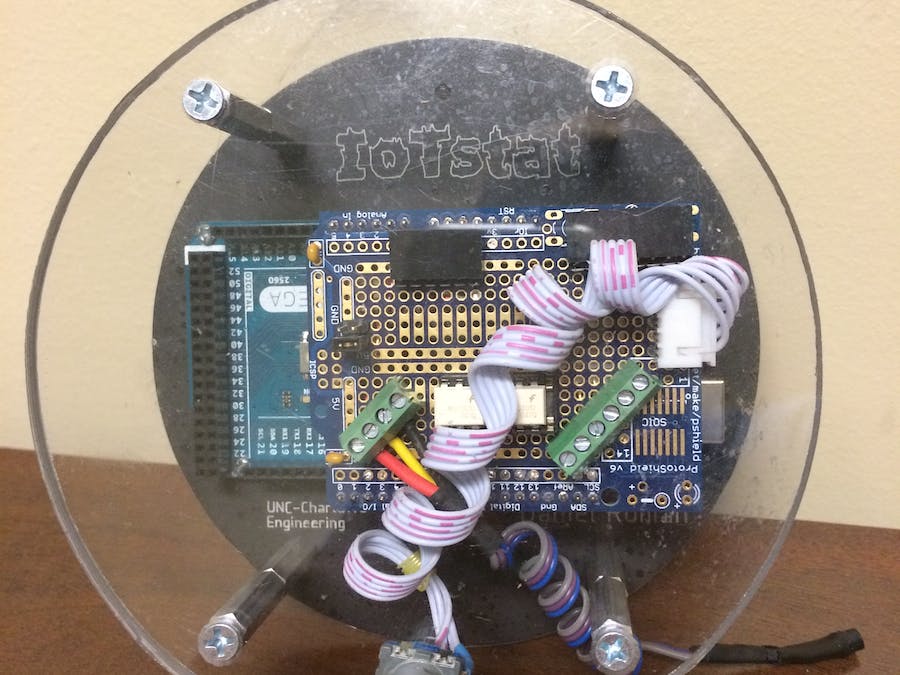 A poor Midterm grade and an engineer's desire for a "smart" thermostat lead to the creation of The IoTStat.  This overly sized thermostat runs on code from the Arduino 1.6.8 software on an Arduino Mega 2560.  It not only has a WiFi 101 shield and a temperature sensor but it also has plenty of potential.

My MEGR 3171 professor at UNCC gave us the opportunity to monitor and/or control a sensor through the internet of things.  I took this opportunity to contact a friend of mine who is an engineer at IBM for his assistance in creating a thermostat that can be monitored from the internet.  His guidance and assistance were greatly appreciated as I am new to projects such as this one.

As previously stated, the IoTStat runs on an Arduino Mega with a wifi shield connected on top of it.  On top of the wifi shield is the prototype shield.  The prototype shield has the temperature sensor, rotary encoder,  and the ports for the wall connected to it.  The purpose of this shield is to provide a board that connects the Arduino Mega to the previously stated components.

The IoTStat is a functioning thermostat and it can be monitored online but it is not finished.  A physical display similar to one on a regular thermostat is still needed to reduce the burden of the ThingSpeak channel.  A twin sister is soon to be born as well for the downstairs unit.  These sisters will be in contact with eachother through ThingSpeak to optimize temperature control throughout the household.  Any changes and additions to the IoTStat and its twin sister will be uploaded here!

This project was done as an extra credit assignment for MEGR 3171 at UNCC.