Imagin being able to controll with your movements a mini version of yourself, well that's what this project is all about.

Mini Me, the Mini Humanoid Robot

Mini Me, the Mini Humanoid Robot

Imagin being able to controll with your movements a mini version of yourself, well that's what this project is all about. 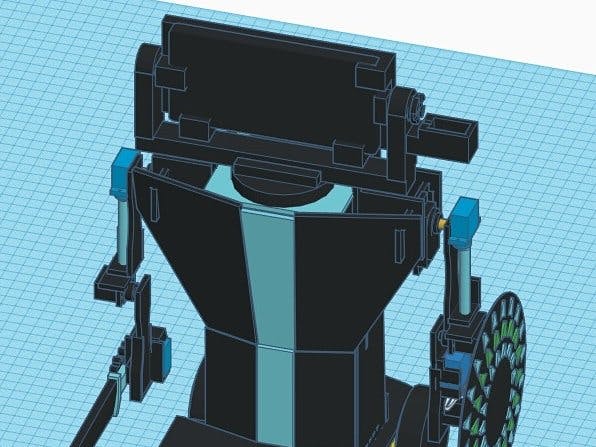 First of all, i'm not a native English speaker, so sorry for possible texting errors

I thought that it would be cool to have a robot that could mimic my movementes, like the robot arm from Youbionic. The thing is that I don't have a 3d printer and can't spend 400 bucks in buying just one arm or buying smaller unstable humanoids robots with legs. It was then when I started to think of making a miniature robot with a similar controll sistem, chaper and easy to boild.

The principal objectives are:

The final robot will have:

For prototyping and testing the strenght of the micro servos I used the Lego Mindstorms EV3 kit for some parts, but ended up removing it for the complexity envolved in controlling it from the arduino. You can see all the 3d models in my tinkercad: https://www.tinkercad.com/things/7larzkg22ko-mini-me-v1

After the first prototype and testing various materials (such as strong cardboard and plastic) I started designing another version, using purely arduino components and 3 mm wooden plates as the principal building material. I chose this material for its strength, weight and rigidity. It also can be cutted with a laser cutter, a hand held power tool or even (with a huge effort) with a handsaw.

When assembled, this design proved to be etremely flawed, as the servos didn´t have enough force to move the arms. Not only that, but in some cases the servos had to take all the weight on their axels, an the robot was overall too big and heavy for them.

Despite all of that I did some progress in the code: I managed to make a simple servo controller that allows me to controll mutliple servos at the time at different speeds, but it defenetly needs more refining thus I wont be publishing it yet.

After those problems, I´ve decided to make a robotic arm with the servos to test different methods of movement. I think the next logical step will be to redesign the entire robot quite a bit smaller and with better ways of attaching the servos learned from the arm.

At this point I was a bit disappointed in having to redisign it, so instead I reduced the amount of servos for one arm from 6 to only 3 and rebuilt it out of balsa wood. After those changes I managed to finally make it work! It can´t lift much weight at all, but at least I was able to save the rest of the body.

After this success I decided to make a puppeteering rigg to be able to controll the robot in a similar way to an exoskeleton, it was made of balsa wood and some cheap pots as I´m trying to make it as inexpensive as posible.

After the rigg I felt ready to start building the exoskeleton, that turned out easier to build than what I spected. After some prototyping, I landed on the final version. It´s made completly of cardboard, hot silicone and reciclable materials, exept for a belt to strap it on to your body. This can always be replaced with any kind of rope.

I used the same cheap pots for this too, obviously not directly; the axels were made of old marker shells, and then I just siliconed the pots in. The good thing about this design is that if you need your hand free, you just let go the handle and don't need to unstrapp anything.

As programming goes, It just maps the values from the pots to 0 - 180 for the servos. I separated the exoskeleton and the robot on to different arduinos: a nano for the exoskeleton and a mega for the robot and used the EasyTransfer library for serial comunication between the two. For now I used a long cable to connect the two serial ports, later on I´ll replace it with bluethooth modules.

With a new 3D printer things changed very drastically. Now I´m able to make precise parts fro my home, and I´m planning on gradually replacing the lasercut mdf with 3D prints. I also got a 13 kg Servo for the shoulder, that improved the arm movement considerably.

The wires are getting messy, but I have a solution in mind for that. In regards to the exoskeleton, I´ve made a better balsa wood mechanical assembly but I´ve also been having problems with the potentiometers.

With the new paintjob and 3D printed gear, this little guy is looking even cooler. I´ve made a device to track objects using the camera from my cellphone, and I´m planning to use it as the head for the autonomus mode.

For more frequent updates check out my intagram: https://www.instagram.com/alguienmuyrobotico/

This is all I managed to do for this project so far. Thanks for reading, hope you found it intresting. I'll be adding more updates on this project so, if you are intrested, make sure to follow me and check those out.