I think adding Bluetooth to everything in my life has become a problem, I'm working on it.

I think adding Bluetooth to everything in my life has become a problem, I'm working on it. 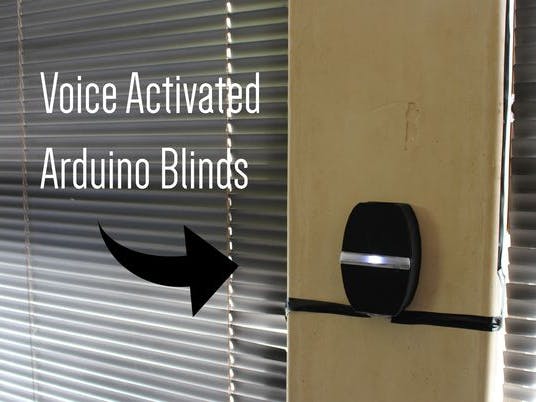 A while ago I made a project where I added a servo and Bluetooth device to my door lock letting me control it with my phone like an addict I just can't stop adding Bluetooth to stuff and so in this project I'm going to show you how to make Bluetooth controlled blinds with some voice activation features. Let's get started!

This project is pretty cheap and really doesn't need that many parts, the parts we will need are:

And for tools and materials we will need:

So the main feature that these blinds are going have is the ability to open and close them from an app. I have two blinds that I want to control with this device so I'm going to be using two motors, one for each blind. When the command U is sent through the Bluetooth device it will spin both motors to the open position and if the command D is sent both motors will spin to the closed position. Now one of the issues I had with my Bluetooth door lock project was that my phone would die before I got home meaning I wouldn't be able to get into my room and so for this project we are going to be adding buttons to the device that let us open the blinds when the button is pressed. Now, of course, this will also feature voice control and the ability to control individual motors allowing us to open one blind at a time but ill talk more about that later,

Don't be fooled by the messy wiring diagram this circuit is actually pretty simple and straight forward if you follow the wiring diagram piece by piece so let's start by connecting the motor controller to the Arduino:

Now we are going to want to connect the Bluetooth module to the Arduino we do this as follows:

Rx and Tx will also be connected to the Arduino but we cant do this yet as once these connections are made we cant upload code so don't connect them until we upload the code.

Now we are going to connect an LED to pin 4 which will show that the device has power:

And lastly, we are going to connect the motors to the motor controller by screwing them into the screw terminal

To gives these motors enough power to turn the somewhat stiff blind mechanism we are going to need at least a 9 Volt 1 Amp wall plug power supply. Once you've found a power supply we are going to want to connect it to our Arduino and the Motor Controller.

It connects to the Arduino as follows:

It connects to the Motor controller as follows:

Now we can plug the motor controller in and give it a test, if everything lights up we can move onto the next step!

This step can be completely up to you as pretty much any case design will work, however, lets take a look at how I designed mine. I made mine out of some strong cardboard, we are going to print out a template, stick it to the cardboard and cut it out. We are going to need to cut our 2 of the main oval shapes, 1 long stip which will be the sides of the case and two curved pieces that we will mount or button on.

We are going to want to score the long piece so we can make it bend around our oval shape which must then be glued down, once we have both sides scored and glued down we can glue down our circuit in the middle of the oval.

Step 7: Connecting the Motors to the Blinds

To connect the motors to our blinds we are going to need to take the stick and hook that is normally used to open the blinds and break the hook off, we will then glue that to the shaft of the motor and hook it onto the blinds movement mechanism.

Now we cant just leave the motor dangling there so we are going to have to glue it to the wall, I used hot glue but the motors are pretty light so most mounting options will work. Same for the case, I glued mine to my wall but its so light that most options will work just fine.

Step 8: Setting Up the App

The app we are going to be using is called "Arduino Bluetooth Control" by Broxcode, the reason I chose this App is because it has not only a terminal feature but also a feature allowing us to send commands to the Arduino when a chosen phrase is said.

To set it up we are going to pair our Bluetooth device with our smartphone, open the app and click the pair button and search for HC-06 and pair with it, if it asks for a password its either 1234 or 0000 once its paired, click on the terminal option and send U and then D through which should make the motors spin clockwise and then counter-clockwise.

If you have questions please let me know in the comments and ill be happy to answer them.