With a little bit of time and effort, a cheap unreliable printer can be converted to be very useful 3D printer.

With a little bit of time and effort, a cheap unreliable printer can be converted to be very useful 3D printer. 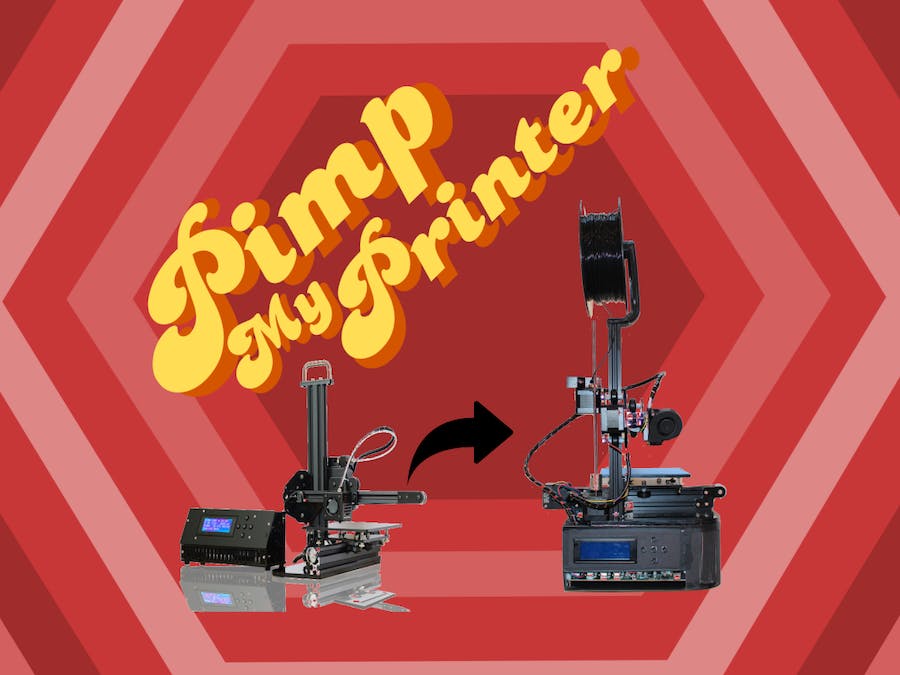 Finally getting a 3D printer can be an amazing feeling all until you print that first print and realize that the there may be a good reason that 3D printer you got was so cheap, or maybe it was expensive and you just like modding things. Either way, most 3D printer out there can be modded and sometimes these mods can make a huge difference and that's what we are going to be focusing on in this project.

Step 1: Which Printer - What We Want to Fix

Now the printer I'm going to be modding is my Tronxy X1 (which can be found here) but most of the mods will be taking a look at and doing are quite universal so if you have a different printer and want to mod it I think reading through this can still be very beneficial to you.

With that being said the Tronxy X1 is a very cheap printer so whatever issues your printer may have the Tronxy X1 definitely has them too. Some of the biggest issues are the lack of a head bed, lack of spool holder, extremely messy case, no filament fan and a few other minor ones that don't have as much of an effect on the final print as the others.

I'll talk more about the issues in detail as we fix them.

Now, this mod probably has the least effect on the final print of all the mods, however, I still thought it was very necessary and I think you'll see why if you take a look at these images. A lot of printers come in two parts, one part is the main controller board with the screen and the other part is the actual printer. I'm sure there's a valid reason why the designers of these printers chose to make it this way however to me the cables just leave such a mess on your desk that it just makes the printer look cheap and hacked together.

Hacked together may be the aesthetic you're going for in your workshop (I know more than a few of my projects look that way) but I really wanted to make my printer look nice and finished so the solution is the design a box for the actual printer to sit on, this box will then have the screen and controller board inside of it. This way the cables and such can run directly down the printer into the box. This also saves space on your desk. Heres a link to a 3D printable box for the Tronxy X1 on Thingiverse if you'd like to check it out.

During the first couple of days that I had my 3D printer the most frustrating thing was the fact that everything technically worked fine but the PLA refused to stick to the bed which meant nothing could be printed, I ended up reading the very lackluster included manual over and over again which didn't mention a fix at all so I thought I would be very smart and scratch and sand the bedplate with a knife to give it indents for the molten PLA to stick to and it worked!

However, I realized was a very stupid idea as once I lifted a print of the newly scratched base I found that all the scratches on the base had left the same pattern in the bottom of my print which gave it a very ugly look. So after a bit of googling, I found that the ultimate solution was to have a head bed, however, there was a cheaper and easier solution. Good old painters tape also known as masking tape.

So this mod requires an additional fan (which can be found here). So the purpose of this mod is to cool the molten PLA as it comes out of the extruder, cooling the PLA causes it to solidify much faster which helps a lot when printing overhangs.

So to attach the fan to our printer we are going to need to print an adapter and an end piece for the fan that directs airflow onto the PLA, the STL files for this can be found here . The print takes about 4 hours to print that does require supports so make sure to add that to your slicer. Once it's printed we can remove the supports and screw it on to our printer with the fan.

Now we just need to power the little fan, I found that the port supply power to the extruder fan supply more than enough current to run both so I'm just going to be tapping into that for power however if you have a different printer you should do a bit of googling before you try this just to make sure your printer is safe.

Another cause of failed prints was the actual filament getting stuck when coming out of its case which meant that the extruder would no longer output PLA when printer causing the printer to keep printing without actually printing anything. The worst thing about this was that you could leave the printer for a few hours and come back to see that the printer says everything printed just fine but only half the thing you want is there.

The solution is obviously a spool holder and if you were to take a look at Thingiverse you'd see that there are actually a metric tone of designs for generic spool holders that can work with any printer.

This is great but I wondered if there was any that could custom fit my printer so I could save even more space on my desk, and there was! It replaces the handle on the top of the printer and works perfectly, it does take about 7 hours to print but the installation is super easy. Links to both can be found below.

I noticed while printing a few things that the base was very loose even after tightening the screws on the rollers. Now this won't necessarily cause a print to fail however most of the time this will cause a lot of inaccuracies in your print which means your prints will end up looking pretty bad, luckily again we can 3D print a fix.

All this print does is connect the 3 rollers together which makes sure they stay at the same angle which is able to completely get rid of any wiggling, this also ensures that the screws don't come undone in the future. This only takes about 3 hours to print but the installation process isn't too easy. We have to completely disassemble and remove the bed and then remove all the spacers from the rollers. Now we can connect the plate we just printed to the rollers, it fits in perfectly in the spacer where the spacers used to be, now we can put everything back together and give it a test. You should find that the bed is much smoother when moving now.

Find the STL for the bed plate here

While there isnt some magical way to make a cheap printer output really nice prints if you put some time into calibrating and fixing it up you can really get a nice printer out of it. Also while fixing it if you learn a lot about your printer which helps a lot when calibrating in your slicer.

Something I really love about this project is using a 3D printer to make itself better, its almost like I have forced the printer to go to a self-help class and it's slowly improving itself.

If you have any questions about the build or mods I'd love to answer them!