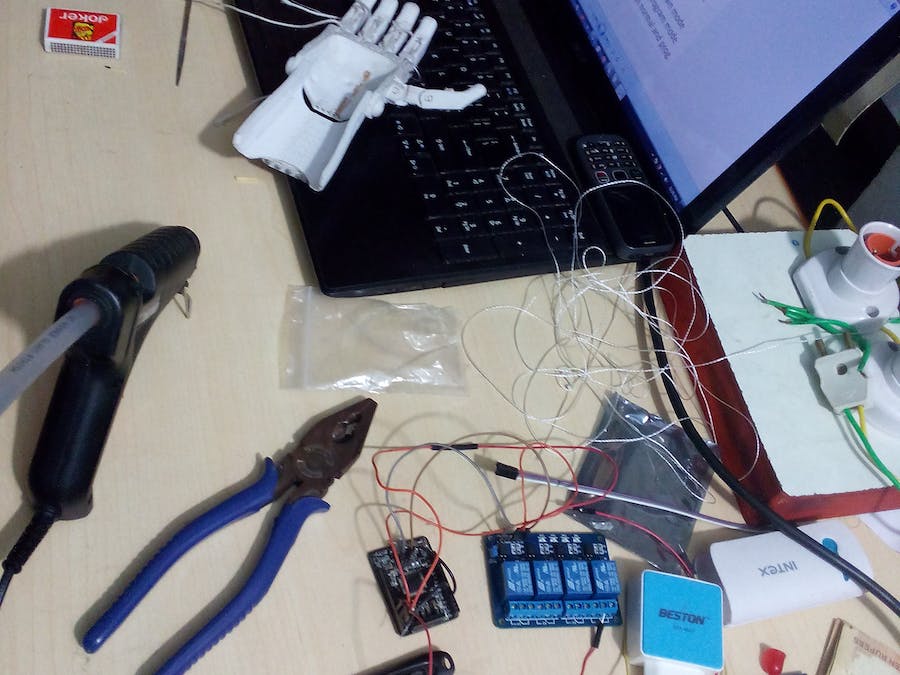 When the call for project submissions for India’s first Mini Maker Faire opened, I decided to re-do this project, albeit use the popular ESP8266 WiFi module instead of a Bluetooth one.

To get started with, I updated the LeapMotion’s SDK and noticed a bunch of improvements including new features in the Motion Visualizer. I cloned my earlier code and started testing out the Java example.

After getting this done, we now had to program the Arduino to configure the ESP8266 to receive data and then have fun. In my first approach, I tried to use the ESP8266 as a in Client Mode, wherein it connected to the WiFi Router and receive data from my PC. This seemed cumbersome as I had to carry the WiFi Router to demo the project. I decided to configure the ESP8266 in Access Point Mode (AP/Hotspot) and get the PC directly talking to the ESP as a Client.

After writing a simple Client Socket code in Java, and testing out if the data was being received at the ESP, it was now time to glue them all together.

And this is how it started off:

I had a printed Raptor Hand and I felt the demo would be made much better by getting a Human Arm to control a Prosthetic Arm :)

After gluing, filing and threading around, the project was almost in shape and ready to be demoed at the Maker Faire.

And after dozens of man-hours, we finally got it all working:

The LeapMotion counts the number of fingers and sends it over the to an Arduino Leonardo derivative board which has an ESP8266 (ESP03) hard-wired beneath. The following actions take place:

It was now time to show this “off” at the Maker Faire:

Most of the folks enjoyed opening/closing of the prosthetic Arm. Half of the folks I met didn’t know what a LeapMotion was and I had to patiently explain to them what it was and then moved onto explaining why I was doing this wireless Hardware integration.

Kids enjoyed it a lot (and I had a good time interacting with them) and other Makers.

And now, let’s dig into the working and the code behind all this fun.

The entire code (Java and Arduino) can be cloned from here: https://bitbucket.org/anwaarullah/wireless-arduino-control-using-leapmotion-and-esp8266

If you need any help in implementing this (or other related stuff), you can email me on syed {Shift+2} anwaarullah d0t com.

Thanks and happy Leaping :)