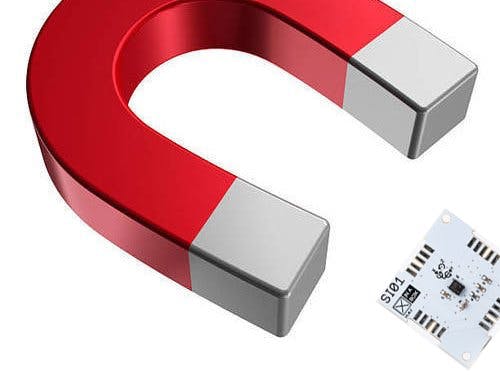 xChip CW01 (ESP8266 Core) is a microprocessor and Wi-Fi module, that enables users to send/receive data from XinaBox's modular xChips to/from the cloud.

xChip SI01 (LSM9DS1) is an IMU 9DoF module that comprises of 3 sensors, an accelerometer that measures acceleration of the X, Y and Z axes, a magnometer that computes orientation to magnetic north, on the X, Y and Z axes, therefore we can calculate which direction we are facing as well as the angle at which we are leaning. The last sensor is the gyroscope that measures our orientation to the center of the earth.

xChip OD01 is a display module that forms part of the output modules and is equipped with an OLED display unit that is capable of displaying any graphics or text.

By the end of this guide, you will be able to build a 3D magnetic sensor (magnetometer) that will first require calibration by moving in the device in a figure 8 pattern to give accurate measurements.

1. Connect xChips CW01, SI01 and IP01/IP02 together using the XC10 xBus connectors. You may connect it as shown in the diagram below. Please see this guide on how to assemble xChips generally.

2. Install these cores/libraries into Arduino IDE:

NOTE: If you are not familiar with how to install libraries, please refer to the links: Installing Arduino libraries and Installing cores

1. After uploading the code, power on the device.

2. The device will request to calibrate by moving it in a figure 8 pattern at startup.

3. After 10 seconds of calibration, the magnetic field values for 3-Axis will be displayed.

In this project we have shown you how to make a Magnetic field sensor using XinaBox xChips CW01 and SI01. Using the sensor we can make a digital compass for navigation and routing projects. The project is simple and requires little or no hardware knowledge to build.

8 projects • 2 followers
ContactContact
Thanks to XinaBox.